There are still members of the Islamic Movement in Nigeria in Bassawa Barracks and Nigerian Army  Depot in Zaria as well as in Military Cantonment Jaji. 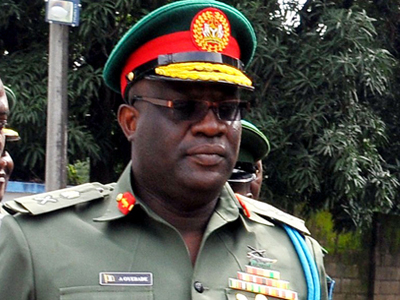 Contrary to the statement credited to the Commander, 1 Mechanized Division of the Nigerian Army, Major General Adeniyi Oyebade [above], stating that the Army had handed over all our brothers and sisters to civil authorities and that there is no one with them, we wish to state categorically that there are members of the Islamic Movement still in military detention facilities.

There are no fewer than 700 brothers and sisters that have been declared missing by the Islamic Movement that are either killed, burnt alive or in military detention facilities and it is in this figure that some are victims of mass burials by the Army.

There are still members of the Islamic Movement in Nigeria in Bassawa Barracks and Nigerian Army  Depot in Zaria as well as in Military Cantonment Jaji.

Also so, no corpses have been handed over to the Movement by the Army as some of them are still being kept at Ahmadu Bello University Teaching Hospital Zaria.

We hereby declare the statement by the GOC that they have handed everybody over to the police as false and mischievous because with the way the Army is acting and doing everything possible to cover up its sins in the massacre, we fear they might eliminate those with them and claim that they are not with them.

We therefore call for the release of all our members that are currently in detention and being denied legal services.

More so, following comments by some Saudi-Wahabbi scholars in various media outfits commending the government for killing members of the Islamic Movement in Nigeria and directly praising Governor Nasir El-rufai and President Muhammadu Buhari for fighting what they described as a “Jihad for them”, we call the attention of those concerned to immediately dissociate themselves from such malicious utterances.

These include sermons delivered in mosques and other religious places including those of the Emir of Kano, AlhajiSanusiLamidoSanusi, who declared Nigeria only for Sunnis in public, thereby displaying the peak of religious intolerance and marginalization of a section of the society by a traditional ruler.

The government is aware of the activities of these Saudi-Wahabbi scholars on radio and television especially in Kaduna and the newspapers where it is directly described as using state machinery to fight jihad for the Sunnis against the minority Shi’ites of the Islamic Movement.

We are all aware that there is no such thing as a state religion in Nigeria and every Nigerian has the constitutional right to practice any religion of his choice and belong to any sect of his choice but contrary to this, a democratically elected government is being hailed for ‘doing jihad’ on behalf of some people.

In as much as the Islamic Movement in Nigeria is a Movement for all irrespective of sect and religion with a majority Shi’ite membership, we are concerned about the sectarian sentiment being sponsored by the state with the intention of intimidating the members of the Movement.

It is the duty of the government to assure Nigerians that it is not involved in using state apparatus in launching attack on and segregating a part of the citizenry because they do not belong to their religious faith.