Nigerian Online Newspaper, Premium Times had reported that at least 105 soldiers attached to the 157 battalion went missing after they came under intense attack from Boko Haram insurgents in Gudunbali, Borno State, on Wednesday morning.

Nigeria has a new government, but Boko Haram is deadlier than ever and in their attempt to cover up the setback suffered by its troops in a recent battle with the extremist Boko Haram sect and discredit PREMIUM TIMES exclusive report on the matter, senior officials of the Nigerian Army have made at least four contradictory statements in the last 24 hours.

But reliable military insiders confided that the terrorists captured a T-72 tank as well as several artillery weapons from the unit. A Nigerian soldier who spoke anonymously to BBC Hausa said that they were tired of ‘dying like fowl’.

An international report monitored by Elombah.com reveals that Boko Haram has overtaken Isis as the world’s most deadly terrorist organisation.

The data, published in the third edition of the Global Terrorism Index, was produced by the Institute for Economic and Peace, and drawn from data collected by the Global Terrorism Database (GTD), collated by the National Consortium for the Study of Terrorism and Responses to Terrorism, said over the past year, Nigeria witnessed a 300 per cent rise in fatalities from terror acts to 7,512. This is the largest increase in terrorist-caused deaths ever recorded by any country, and is predominantly down to Boko Haram’s expansion.

PREMIUM TIMES said that when they contacted the spokesperson of the army, Sani Usman, before their story on the massacre was published, he directed them to forward their enquiries to officials of 7 Division in Maiduguri.

However, the spokesperson of the 7 Division, Tukur Gusau, a colonel, also declined to comment on the matter saying the commander of the division would address a press conference on the issue later on Thursday and that it was improper for him to pre-empt his commanding officer.

However, after the story ran, Mr. Usman called Premium Times reporter to officially confirm that the attack indeed took place as reported.

“I want to confirm the incidence at Gudunbali but the details you provided were not correct. “The unit attacked is within the area of responsibility of the MNJTF and troops are now organising to counteract the attack,” he said.

However, he did not give contrary details of the attack to counter PREMIUM TIMES account of the incident. He merely added that the theatre of command would provide details during a press conference in Maiduguri later on Thursday.

During that press briefing, attended by our reporter in Maiduguri, the commander of 7 Division, Yushau Abubakar, also admitted that the troops were involved in a major clash with the insurgents. He further stated that several causalities were recorded on both sides.

“Our troops were attacked in Gudumbali where we dislodged the Boko Haram there. We had an attack and we are sorting it out. But I have not heard anything relating to what is being reported in the media, he said.

He however became evasive when pressed further for details of the attack by journalists.

“I have spoken with the CO (commanding officer) there even this morning and I have not heard anything of such from him. Yes, we went to Gudumbali and we were attacked and we repelled them and we are currently sorting out the situation. In war anything can happen and the operation is ongoing.”

However, later on Thursday evening, the military issued a statement describing the report of the attack as a product of “the imagination of those sympathetic to Boko Haram ways of life.”

“The attention of the Theatre Command Operation Lafiya Dole was drawn to an online media publication saying troops of 157 Task Force Battalion were overran by the Boko Haram terrorists in Guzamala axis of Borno state and that several personnel were killed and several others cannot be accounted for including the Commanding Officer of the Unit, the statement signed by Mr. Gusau read.

At no point in the two reports on the matter did PREMIUM TIMES say the soldiers were killed. they merely reported that they were missing.

“The Theatre Command wants to state clearly that the story is a fabrication from the imagination of those sympathetic to Boko Haram ways of life.

“Although the location of 157 Battalion was attacked last Wednesday and was subsequently repelled by the gallant troops of the Unit, the Commanding Officer of the Unit is in contact with his Brigade Commander.

“However, the unit suffered some casualties which is normal in military operations. The affected personnel sustained minor injuries but no gunshot wound was sustained by the troops.

“The number of casualty and equipment lost as being circulated is not correct. The situation was unnecessarily blown beyond proportion to give terrorists the type of propaganda they desired,” he stated.

Also later on Thursday night, Mr. Usman, circulated another statement, describing the incident in Gudunbali as a “slight setback”.

“The situation is being stabilised,” he said. “The troops have rejoined their unit for further action. The earlier media reports were exaggerated. The CO is right now with his soldiers. It is just a minor setback and such are common in military operations,” he said.

However, in all its comments on the incident, the military failed to say whether soldiers went missing at any point during the operation or not.

“We are not surprised by the army’s desperate attempt to confuse Nigerians,” Mr. Mojeed said.

“We understand they were shocked that we got to know about the incident. We stand by our story, and we will provide further details as necessary.”

President Buhari was elected on the promise of defeating the terror group. But until the military is properly equipped, nothing will change, according to Chika Unigwe, in an article in The Guardian. 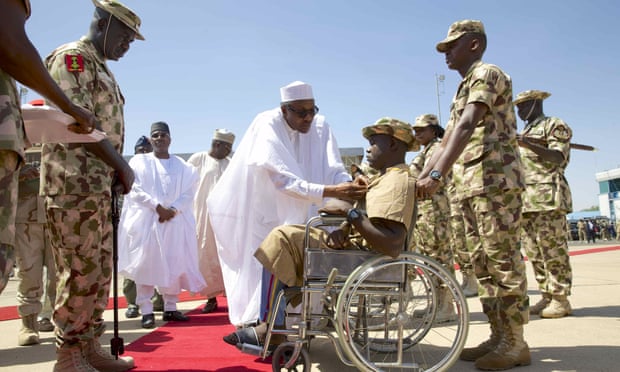 President Buhari presents Lance Corporal Kenneth Kulugh with the Purple Heart medal for gallantry in the fight against Boko Haram during his visit to Nigerian troops in Yola, Nigeria, 13 November 2015. Photograph: Reuters

On 17 November more than 30 people were killed and more than 80 injured when a suicide bomber attacked a market in Yola, in north-eastern Nigeria. The attack was blamed on Boko Haram.

The next day, the group struck again, this time in Kano, using two young females, one of whom was only 11. At least 15 people died in that attack, including the bombers, and many more were injured. Across social media, Nigerians decried the attacks. “When will this end?” a friend of mine asked on Twitter after the second attack. Responses were mostly pessimistic. They varied from “Never. This is the new normal ):” to “Only God will help us. Buhari can’t.” With each attack, and each renewed vow by this government to fight the insurgents, even friends who are naturally optimistic sounded less so this time around.

While two attacks within such a short space of time is sadly not atypical for Boko Haram (in July this year, Borno state came under multiple attacks which left more than 200 people dead in 48 hours), what makes these latest attacks more chilling (and perhaps more embarrassing for the government of President Buhari) is that they come only a few days after Buhari’s visit to Yola. His visit was to decorate soldiers for bravery in the fight against the terrorist group, and while there, he declared that his government was close to defeating Boko Haram.

Goodluck Jonathan’s massive loss at the March 2015 elections was due in part to Nigerians’ perception of his government as weak against Boko Haram, and the voters’ conviction that ex-military dictator General Buhari had the requisite know-how to put a definite end to the scourge of Boko Haram. Buhari’s rhetoric of change, and his vow to decimate Boko Haram won him victory. In the days following his election, there was some hope, even among those who did not vote for him, that if he did nothing else, he would tackle Boko Haram. Apart from having the reputation of being “a hard man”, “a no-nonsense man”, he was also a northerner. And a Muslim. Perhaps, with a northern Muslim in power, Boko Haram would be persuaded to go underground. If he couldn’t do it, who could?

Chika Unigwe also wrote: “Between July and August, Nigeria’s state security services arrested 10 alleged Boko Haram across five states. In September, the Nigerian forces raided two Boko Haram camps in villages in the north east of the country, arresting more than 40 suspected members of the group, and releasing more than 200 abducted women and children. In October, 45 suspected members of the group were arrested in Lagos. Yet despite this, and other reports of arrests of Boko Haram insurgents, the change Nigerians had hoped to see does not seem to be materialising. Boko Haram is still seen to be winning this fight. A report released this week by the Australian thinktank Institute for Economics and Peace says that Boko Haram is the deadliest terror group in the world.

“But the “deadliest terror group” in the world does not operate in a vacuum. Testimonies collected by Amnesty International reveal that villagers sent advance warnings to security forces when they saw Boko Haram on motor bikes entering the village. The security officials failed to avert the disaster because they did not act on the alert. Or could not. Last year, a Nigerian soldier who spoke anonymously to BBC Hausa said that they were tired of “dying like fowl.” Soldiers, he said, were not being given enough weapons and ammunition to fight Boko Haram. Just recently, Buhari ordered the arrest of former President Jonathan’s security adviser, who stands accused of awarding fictitious contracts to buy a dozen helicopters, four fighter jets and ammunition to help combat Boko Haram.

“One does not barge into a well-armed enemy’s house to fight him with an empty hand. If Buhari is to fulfill his election promise, his government has to do more than send ineffectual “final” warnings to Boko Haram. Community policing must be encouraged, but it must be done in tandem with properly equipping our soldiers.”

Church and Politics: The Perils of an Infamous Alliance