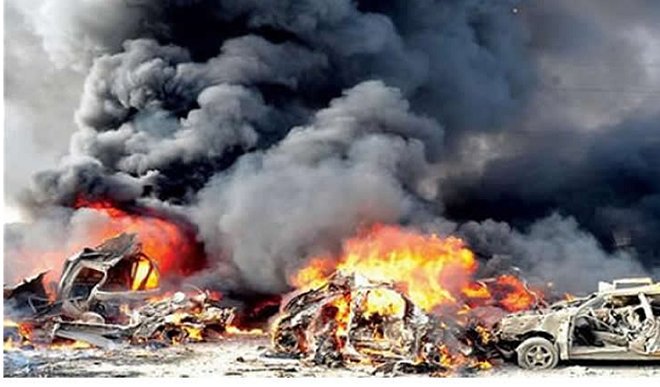 The explosions occurred at the Muna Garage and Muna Dalti, suburds of Maiduguri which have experienced more than five blasts in the past.

The Police Commissioner, Mr Damian Chukwu, confirmed the incident in a text message sent to newsmen in Maiduguri.

Mr Chukwu said a male suicide bomber with explosives strapped to his body caused the first explosion at Muna Garage, “killing himself and 13 persons.” Five persons were also injured, he disclosed.

He said that the incident occurred when a male suicide bomber detonated an explosive device in a crowded area, killing 13 people and wounding five others.

“On 22/10/2017 at about 20: 20 hours a male suicide bomber detonated IED strapped to his body at Muna Garage, killing himself and thirteen persons, while five others sustained injuries.

“In another development at Muna Dalti, two female suicide bombers detonated IEDs killing themselves and injuring 13 others.

“The Injured persons were referred to the University of Maiduguri Teaching Hospital (UMTH) for treatment and corpses were evacuated.

“Police EOD teams have been deployed to sanitise the scene.

“In all, 16 persons were killed and 18 others injured in the three explosions,” the commissioner said.

Satomi said that the State Government would provide free medical treatment to the victims.

He called on the people to be vigilant and provide useful information to security agencies.

“We have recorded about 13 suicide bomb attacks this year at Muna area. The area is vulnerable and I advise residents to be more vigilant,”the chairman said. (NAN)

Anambra Guber: ‘What Will Decide The Votes’ – Chidoka