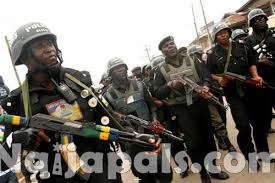 The Police in Ekiti State on Wednesday linked  two brothers of same parents with alleged ritual after they found a severed head with one of them.

The News Agency of Nigeria (NAN) reports that the state Police Public Relations Officer, DSP Alberto Adeyemi, gave the names of the suspects as David Oluwatosin and Tosin Oluwatosin.

Adeyemi, however, said that David is at large, while Tosin has been arrested

The severed head was the third discovered within three weeks. It belongs to a 12 year-old victim, whose identity has not been revealed by the police.

The first two severed heads were recorded in the heat of the Ayede-Itaji land dispute.

The Police spokesman confirmed that Tosin was arrested with the head in Ifaki Ekiti, Ido/Osi Local Government Area of the state, following an intelligence report from an unidentified source.

“One of the suspects is on the run.  The victim is about 12 years old. We are still looking for the severed body and we are also on the trail of the one at large.

“After investigation, the suspects will be charged to court,” he said.

The police spokesman, who decried incessant cases of beheading in the state, said the police would also investigate if the two brothers were involved in the first two incidents.

There Must be end to child sexual exploitation – Ashton Kutcher