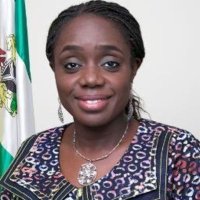 THE Finance minister, Mrs Kemi Adeosun, Tuesday, told the Senate that the Federal Government would sustain its over N6 trillion national budget in the 2017 appropriation bill, expected to be submitted by President Muhammadu Buhari, after the consideration and subsequent approval of the pending 2017—2019 Medium Term Expenditure Framework, MTEF and Fiscal Strategy Paper, FSP, by the National Assembly.

The minister told members of the Senate Committee on Finance, led by its Chairman, John Owan Enoh, PDP, Cross River Central, who were on oversight visit to her ministry that government would maintain its over N6trillion annual budget because it spends over N3 trillion out of the budget sum for salaries, pension and debt services , leaving a paltry amount for capital projects.

Adeosun insisted that the country would be gambling with the figure for now as it can’t go below it anymore in the face of high expectations from its citizens. Senator Enoh had told the minister that the committee’s visit was “actually driven by the collective decision of the Senate a few weeks ago that all its standing committees embarked on oversight visits to all ministries, departments and agencies of government.’”

“So, for us as a committee, in addition to having to respond to that requirement, it also became imperative that we embark on this maiden visit. “Our hope is that on this visit, the minister, quite apart from giving us some highlights of the implementation of the Ministry of

Finance budget in the year 2016, would also throw some highlights on few of some of the things that she feels the committee should know,especially the performance of our economy, no matter how briefly, and some things that we could take advantage of because we oversight her ministry, so that we don’t just hear as secondhand but hear as firsthand.

“This is October, the Medium Term Expenditure Framework is already sent to the National Assembly for approval so that the 2017 budget can come. We have a few revenue challenges, most of all is the performance of the independent revenue of government. So we think that the minister would take advantage of this meeting and be able to bring us to speed with a few of these things”, he added.

The Committee berated the minister for what it described as her poor handling of agencies under her watch, resulting in monumental leakage and loopholes. ” There are a lot of drained pipes and leakages in the customs, I don’t think that the ministry under your watch has given sufficient attention to the customs in particular”,

Senator Hope Uzodinma, a member of the committee and Chairman, Senate Committee on Customs told her. Responding, Mrs Adeosun disclosed that government’s efforts at realising money from revenue generating agencies to meet the expectations of Nigerians were being hampered by high-level corruption still existing in the agencies, especially the Nigerian Customs Service, which she described its men as “cohesive crooks hard to break.”

To this end, she solicited an urgent intervention of the National Assembly in curbing the loopholes and excessive leakage not only in the revenue sourcing agencies but also all other Federal Government’s agencies, saying they were stinking of corruption. The minister particular disclosed that about two trillion from the budget was going out for salaries of workers and pension alone the sum of N1.4 trillion was also going out for debt servicing, saying the situation considerably slashes down the budget sum, a development she noted, made it impossible to downsize the budget.

Nigeria: Are Judges a basket of deplorables?