After 640 deaths in Kano in one week, the question on everyone’s lips is “What is happening?” What is our governments, both at the federal and state level doing about it?

See reports and reactions below:

640 deaths in Kano in the last one week?

Jeez, we are in soup.

Please #Pray4Kano.
This audio will give you chills.

We know that their #COVID19 lab has been shut down & @NCDCgov is no longer calling the result of #CoronaVirus incidence in Kano State.

I feel sorry for this lady & I'm concerned.

The Facebook pages of my friends from Kano have become obituary boards, and there’s no way to defend that it’s normal. The mortality rate in Kano seems to have surged, and even though it’s not been linked to any disease yet, it’s important to determine the causes of these deaths.

The rising death rates in Kano state is not getting the attention it deserves from KNSG. Scores of elderly people are dying everyday and the government is not putting any effort to investigate the issue. Three of my close neighbours died in less than 24 hours! pic.twitter.com/j5WKjDVjX2 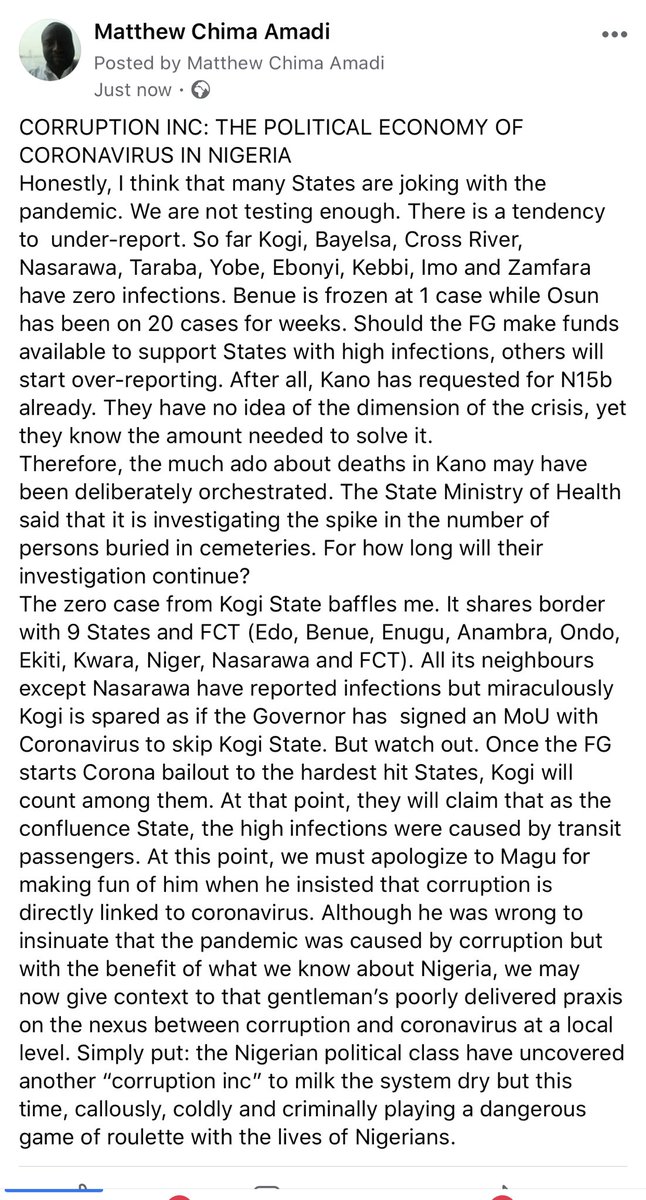 But our leaders have normalize the death of the poor

Since the Kano State Govt dismissed the news of mass deaths and said that they were investigating (them) in the same press release, I knew that there’s no genuine interest in the development.

KNSG is one of the state in the entire North that got highest donation from its politicians, companies and philanthropists but resorts to seeking more funs from F.G to contain spread of Covid-19. While state like kaduna and others uses her scarce resources to put things right.

This is what your clerics are doing to the citizenry. pic.twitter.com/K08YPKa89u

NCDC DG (On AIT) just said Kano is top of their priority right now. He added that samples from Kano were taken to Abuja and results will be out today.

But it doesn't mark front pages of national dailies,how many TV stations in Nigeria report about it, that's our problem, when it becomes news the people in authority are forced to do something, keep quiet they think all is well.

Burial of 200 people in Kano. No autopsy, so cause of death, unknown.

Soon, the traders in Kano will donate the disease to other states. pic.twitter.com/E7nZb0XrHe

What exactly is going on in Kano nobody seens to be talking about?

640 deaths in one week and the causes of the deaths nonody knows? pic.twitter.com/SATdodlYeJ