IMN had also made public the discovery of mass graves in which its members have been buried by the Army in the early tempo of the pogrom. 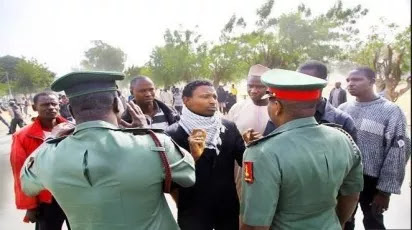 Shiites and the army

Following the unfortunate Army clampdown on the Islamic Movement in Nigeria, IMN, that took place in Zaria on the 12th to 14th of December 2015, in which hundreds were killed, hundreds more injured and property worth millions demolished by the Kaduna state government to complement the attack, the Nigerian Army has engaged in a cover-up campaign aimed at cleansing itself from potential crime against humanity charges.

As part of the Army plans, just a few days after the attack, the Chief of Army Staff, COAS, submitted a petition to the National Human Rights Commission, NHRC, indicting the revered leader of the Islamic Movement, Sheikh Ibraheem Zakzaky.

The COAS claimed an assassination attempt on his life and also stated that only seven members of the Movement were killed by the Army in the pogrom.

On another invitation by the NHRC on the 19th of January 2016, the COAS maintained the same figure of those he claimed to have been killed by the Army, a statement that made headlines in the media judging by the intensity of the pogrom.

Against this background, IMN hereby categorically disputes the said figures as insinuated and unsubstantiated, because already the Movement has collected over seven hundred names and profiles of its members missing during the attack and the collection of names is still on.

And attached to this statement is the provisional list so far collected of the victims and their towns.

The IMN believes that most of those on its list were either killed by the Nigerian Army during a killing spree they embarked upon on unarmed members of the IMN at the Hussainiyya in Zaria, residence of the leader of the Movement at Gyallesu and Darur Rahma at Dambo village near Zaria, while the remaining are illegally being detained in Army detention facilities.

Bishop Okeke is a blessing to the society ~ Obi

The IMN had also made public the discovery of mass graves in which its members have been buried by the Army in the early tempo of the pogrom.

Other sources have also confirmed higher figures that dispute the figures concocted by the COAS including human rights organizations, hospital, eye witnesses, pictures and videos as well as victims that survived the Army indiscriminate killings.

Officially, ABUTH also stated that only sixty-one corpses were deposited with them by the Army even as the Army had taken away corpses to unknown locations and also denied access to them.

Having perused through this submission, it will be clear to all that the Army is seeking to deny killing members of the Islamic Movement in its attempt to cleanse itself of crimes against humanity that include gross human rights violations, extra-judicial killings, violation of its rule of engagement as well as disregard to the rule of law.

The IMN will continue to expose this misdeed perpetrated against it by the Nigeria Army which has violated the tenets of democracy, and will also seek redress using peaceful means until justice is achieved.

On a final note we call for the unconditional release of the revered leader of the Movement, his Eminence Sheikh Ibraheem Zakzaky, other members of the Movement in detention and corpses of those killed by the Army.

President of the Media Forum of the Islamic Movement in Nigeria

Bishop Okeke is a blessing to the society ~ Obi

Attack on Fulani a social upheaval that may destabilise Nigeria ~ ACF