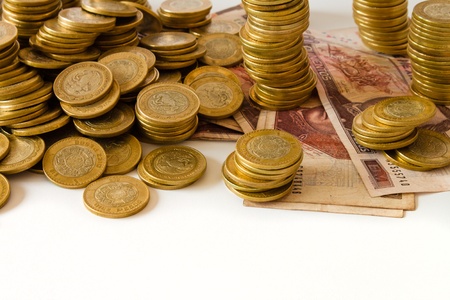 THERE is a saying, “Money makes the world go round.” There is some truth to that statement. After all, it takes money to buy food, obtain clothing, and pay for rent or buy a home. “The role of money in society is incredibly

important, ” writes one financial editor. “If money was removed as a means of exchange, we would be in a state of panic and war within a month.”

Of course, money has its limitations. Norwegian poet Arne Garborg said that with money “you can buy food, but not appetite; medicine, but not health; soft beds, but not sleep; knowledge, but not wisdom; glitter, but not beauty; splendor, but not warmth; fun, but not joy; acquaintances, but not friends; servants, but not faithfulness.”

When a person maintains a balanced view of money—regarding it as a means to an end rather than an end in itself—it is possible to enjoy a greater measure of contentment. The Bible warns that “the love of money is a root of all sorts of injurious things, and by reaching out for this love some have . . . stabbed themselves all over with many pains.”—1 Timothy 6:10.

Note that it is the love of money—not money itself—that brings harm. Indeed, an inordinate focus on money can drive a wedge between friends and between family members. Consider some examples.

Money floats down into a pile

Daniel: * “I always thought of my friend Thomas as a pleasant and honest person. I never had any problem with him until he bought my used car. I wasn’t aware that there was anything wrong with the car. Still, he agreed in writing to buy the car as is. Three months later the car broke down. Thomas felt cheated and angrily insisted that I return his money. I was shocked! When I tried to reason with him, he became belligerent and hostile. When money became an issue, he was no longer the amiable Thomas I knew.”

Esin: “Nesrim is my only sibling. We always got along, so I never thought that our relationship could be damaged over money. But that’s exactly what happened. When my parents died, they left us a small inheritance and stipulated that the money was to be divided equally between us. My sister went against my parents’ wishes and demanded more than her share. Because I chose to honor my parents’ instructions, she exploded with anger and threats. To this day, she remains bitterly resentful of me.”

A distorted view of money can cause people to become judgmental. For example, a wealthy person might assume that those who are poor are too lazy to better themselves. Or a person with lesser means might hastily conclude that those who have more are materialistic or greedy. Leanne, a teenager in a relatively wealthy family, was a victim of that type of prejudice. She relates:

“I used to be known as the girl whose father makes loads of money. So I often got comments such as: ‘If you want something, all you have to do is ask Daddy’ or ‘Sorry we aren’t all rich and can afford nice cars like your family.’ I finally asked my friends to stop saying those things, and I explained to them why their words hurt me. I wanted to be known, not as a person who has money, but as someone who does kind things for others.”

WHAT THE BIBLE SAYS

The Bible neither condemns money nor criticizes those who have it—even a lot of it. The point is not the amount a person has but his attitude toward what he has or wants to acquire. The Bible’s counsel regarding money is balanced, and it is as relevant today as when it was written. Note the following examples.

THE BIBLE SAYS: “Do not wear yourself out to gain wealth.”—Proverbs 23:4.

According to the book The Narcissism Epidemic, people who pursue wealth are more apt to “suffer from poor mental health; they also report more physical health problems such as sore throats, backaches, and headaches and were more likely to drink too much alcohol and use illegal drugs. Striving for financial success, apparently, makes people miserable.”

THE BIBLE SAYS: “Let your way of life be free of the love of money, while you are content with the present things.”—Hebrews 13:5.

A person who is content is not immune to financial anxiety; however, he knows how to put his anxiety in perspective. For example, a content person will not overreact to financial loss. Rather, he will strive to have the attitude of the apostle Paul, who wrote: “I know how to be low on provisions and how to have an abundance. In everything and in all circumstances I have learned the secret of both how to be full and how to hunger, both how to have an abundance and how to do without.” —Philippians 4:12.

THE BIBLE SAYS: “The one trusting in his riches will fall.”—Proverbs 11:28.

Researchers cite money problems as a common factor in marital strife resulting in divorce. Money problems have also been a factor in suicide. For some people, money is more important than their marriage vows or even their life! In contrast, those who have a balanced view do not put their trust in money. Instead, they recognize the wisdom of Jesus’ words: “Even when a person has an abundance, his life does not result from the things he possesses.”—Luke 12:15.

HOW DO YOU VIEW MONEY?

A man, with money stacked beside him, examines himself in a mirror

A self-examination might alert you to the need to acquire a balanced view of money. For example, ask yourself the following questions.

Am I attracted to get-rich-quick schemes?

Do I find it difficult to be generous with my money?

Do I tend to make friends with people who constantly talk about money and the things they own?

Do I resort to lying or to other unethical practices in order to make money?

Does money make me feel important?

Am I always thinking about money?

Is my attitude toward money adversely affecting my health and family life?

Cultivate generosity by giving to others

If you answered yes to any of those questions, make an effort to reject materialistic thoughts and temptations. Avoid friendships with people who attach too much importance to money and possessions. Instead, seek association with people who place greater value on high moral principles than on possessions.

Never allow the love of money to take root in your heart. Rather, keep money in its place—always subordinate to friends, family, and your emotional and physical health. By doing so, you will show that you have a balanced view of money.

Two women angrily look at each other

FAMILY IS MORE IMPORTANT THAN MONEY

“My father recently made a decision about his will that substantially reduced the amount I would inherit, while increasing the amount that would go to my siblings. But we talked about it. I understand his reasoning completely, and I agree with his decision. I will never allow anything as trivial as money to cause a division in my family.”—Josué, 55.

“The poor man is hated even by his neighbors, but many are the friends of the rich person.”—Proverbs 14:20.

As that verse from the Bible indicates, our view of money can affect how we treat people. For example, we might tend to despise those who have little means and who can do nothing for us. On the other hand, we might fawn over those who are rich, ingratiating ourselves with them in an effort to gain their favor—and perhaps some type of monetary reward.

The Bible expresses disapproval of people who show favoritism, whether by despising the lowly or by “flattering others for their own benefit.” (Jude 16; Isaiah 10:1, 2) Make it your goal to view and treat people equally.

WISDOM FROM THE BIBLE

“The one hastening to get rich will not remain innocent.”—PROVERBS 28:20.

“Those who are determined to be rich fall into temptation and a snare and many senseless and harmful desires.”—1 TIMOTHY 6:9.

“Guard against every sort of greed, because even when a person has an abundance, his life does not result from the things he possesses.”—LUKE 12:15.

“Do not forget to do good and to share what you have with others.”—HEBREWS 13:16.

What are the benefits?

“There is more happiness in giving than there is in receiving.”—ACTS 20:35.

“The generous person will prosper, and whoever refreshes others will himself be refreshed.”—PROVERBS 11:25.

Money enables us to buy certain things we need, but the greatest satisfaction in life comes from things that money can’t buy.

How Do Bible Principles Benefit Us?

Jesus explained why we need guidance and what two Biblical principles are of prime importance.

Can abundant riches make you happy? Read what the Bible says brings true and lasting happiness.

The Leahy Act: Why America is right to deny Nigeria weapons sales