A closer look at the legends of Sir Victor Umeh 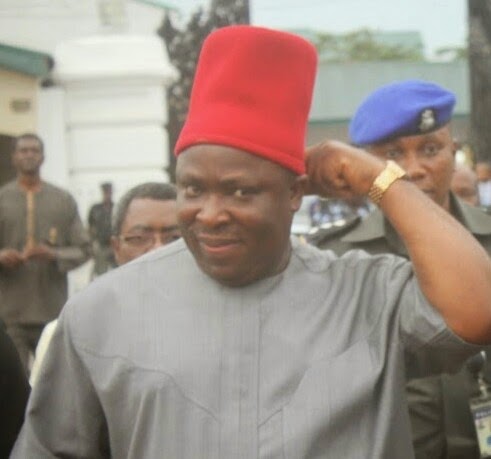 Sir Victor Umeh was the chairman of APGA after a desirable removal of the then chairman Chief Chekwas Okorie who was found dipping his paws into the purse of APGA , also who traded the APGA gubernatorial mandate won in Anambra State under the stable of Mr Peter Obi ,who flew the APGA flag and won the election free and fair in 2003. Chekwas traded the mandate to PDP under Ngige and collect some financial benefits at the expense of the party he was chairing ,and that is anti party attitude which resulted in his losing favour and followership.

Sir Victor Umeh was the treasurer of the party and by hierarchy and ascension to the throne ,he is not in contention but by crook and hook he manipulated his way to the top of the food chain ,that was the genesis or the making of tiger with 64 teeth . A schemer schooled in personal aggrandisement and manipulative tendency , he thrives when there are mis-trust and mis-understanding , in most cases he creates the mis trust and mis understanding to bring to fore the Igbo saying “ofioba afioba ,obalu onye aghugho” [when the session is rowdy, a fraudulent and cunning person benefits]

He took over the constitutional designations of the pro with that he issues all the press statement , responds to all issues relating to APGA. He became the treasurer ,he keep the assets and inventory of the party and i was pissed ,not with him but the officers who allowed him to take over the constitutional duties of officers elected with him on same day ,then somebody told me the story behind the procurement of that long red cap ,how the dibia from Nawgu congested that cap with ekwu ekwe ,making it the reason he cannot wear anything that will not match the wearing of that mystic long red cap. That is one reason why suit or casual wear is out of the question.

Since he took over the helms of APGA all the funds released to run the party has been going to his individual pocket, which he employs in enriching himself with magnificent edifices ,exotic cars and expensive life style, the party members were starved out completely and many thought that the then governor weren’t making provision for the growth of the party , whereas the gospel truth was that one man with the myth of Nawgu got hold of all and keep them all to himself ,but that was just a step toward the many heist .

More than thrice he’ve sold APGA form for local government election ,he sold it himself ,whereas it was supposed to be the duties and designation of the state chairman of the party ,but he shifted his focus and base , instead of staying Abuja planning on how to take the party to national podium ,he was in the only state under APGA, snatched back by consistent of Peter Obi who spent 3 years in court spending his own money to get justice and he got one which the judiciary titled “Peter Obimania” .

The proceed from the forms sold both to the counselors and chairmen aspirants did not get to the treasurer of the party nor find its way into the account of the party ,it ended up in the purse of one man with Nawgu red cap .

All the gubernatorial aspirants that bought forms , the money ended up in same pocket . Now the scam moved to higher class , where prof  Charles Soludo were promised automatic ticket of the party ,he paid and he was screwed out .

Ifeanyi Ubah of Capital Oil fame were the next to get scammed by same LRC and he wasn’t issued ticket nor refund.

Gov Rochas Okorocha was targeted as object of extortion and he ran as far as his leg will carry him, because Rochas believe that a con man will never con  a professional con man.

The tide started to change when Chief Umeh decided to yank the house of representative  ticket of Iyom Uche Ekwunife ,the lady with  a Midas touch and a class act or who they call –politician with a swag .

She wants to go back to house of representative and Sir Umeh told her that he gave her ticket to another person ,just because he can …waoooooooo , Senator Iyom Ekwunife ,the obiri Ohamadike aka na ani looked him on the face and told him “Ohamadike ,why didn’t you allow me to stay where I was ? Just because you want to run for the senate in my own senatorial zone , so you are eliminating political power blocks ? Well , because of this slight I will meet you on senatorial race and I will floor you through and through ”.

Well, we all remembered that even though the governor invested most of the state fund trying to fulfil an agreement of 2 tenure as senator and position swapped , yet this young lady beat both the state ,the party and Umeh black and blue ,but they cannot extend hand of fellowship to a lady who gets for the state what the men cannot and will not get from the federal .

They went to Ikembas  grave to dance ,they went to Nawgu this time to raise the spirit of retired and resting Ikemba to complain to him that  “Obi left ,Ekwunife wants to beat me and that there is nobody left to fight for me “ .

Moving forward ,now that my state bought a second whooping judgement ,which I heard from grapevine that it cost us 800 million naira to buy that judgement , dragging my state back to another round of expensive waste called election.

Going to the senate –

Sir Victor Umeh is qualified to be in the senate when it is only for touts and designated agberos , from the day he wrestled a policeman who was controlling traffic at women development centre . The way he charged like a bully on that policeman makes it crystal clear that he is a qualified bully that should be in the park and not leading a party , talkless of the bad dream of going to the senate .

The day he came down from his vehicle and wrestle to the canvass the poster pasting boys for Ekwunife during the previous election which Iyom beat him blue, black and purple, will also convince one that we have a talent we are wasting ,he should be in charge of our motor parks where his talent lies .

The day he charged at Victor Eneh at Enugwu Court premises , confiscated  his I pad and phone ,then was ready to wrestle him in the open …with all the above i conclude that he may be a good senator in the house of agbero .

A man who put his town in controversial power tussle , a man that chased away all the heavy weights in the party, he left the party so frustrated and empty to the extent that the party APGA had to brought a man who is not a member of APGA and gave him ticket to run for the governor and later same became the bot and leader of the party he know nothing about and  invested nothing inside .

The party were so frustrated that they also made bazaar chairman ,a none card carrying member the party national chairman .

The question now is where are those party big wigs that made APGA number 3 party in the nation? Wwhere are the founding fathers of APGA? Where are the people that served with Umeh and NWC of the party ?

Sir Victor Umeh may have potentials and talents but definitely not enough to represent us in the senate.

I am quite sure that if truth be told , Sir Victor Umeh will be happy to vote for the well serving senator Uche Ekwunife ,the Chairman of Downstream Petroleum in the Senate ,a position that will benefit the state immensely .

Next focus will be on Uche Ekwunife , we will focus on her life ,service in the house of rep and in the senate and with that we are off but on .

Sack Sunday Oliseh to save his life, Ekwueme tells NFF