A meal for Mediterranean fishes

In November 2013, BBC ran a shocking story captioned “I buried my family.” It was a story of 14-year old girl called Shafa. Shafa cheated death (miraculously) in Sahara

desert after burying her two sisters and mother –they died of intense heat and dehydration.

Little Shafa and family weren’t alone, but among the passengers (numbering more than hundred) of two Lorries bound to Algeria from Niger Republic. “We are on our way to visit our family members,” the poor girl said, but from all indication, they were on a run –trying to leave behind a woeful existence for opportunities in Algeria and possibly Spain.

But they didn’t enter Algeria much less Spain. Their drivers turned back on seeing Algerian forces-“they didn’t want to be caught carrying us since it was illegal,” poor Shafa observed. En route back to Niger, their trucks ran out of fuels and, the drivers after extorting fuel money from them vanished.  Passengers of more than a hundred were trapped in Sahara desert. “We waited for two days –no food, no water –before we decided to start walking.” Eighteen made it back home and raised the alarm but before anything was done, ninety-two migrants had already transmogrified into decomposing corpses. Their belated rescuers couldn’t help but to offer them a Muslim burial.

Why this spike in migration through Sahara desert and Mediterranean Sea? And why are African youths so desperate to leave Africa? Answering these questions will offer us a perfect analysis of how politics and government have degenerated in the continent.

If governments are working, that is ‘doing for the people what they cannot do for themselves,’ no African youths will fancy leaving their country let alone through Sahara desert and with derelict ship over Mediterranean. What this is telling us is simple: leadership failure!

The environment is configured to suit and serve the needs of the elite class and their cronies. Ordinary man in Africa is just a mere pawn in the political chess board. So tell me why there won’t be migration spike?

Africa is no longer conducive for youths. Everything -virtually everything- is in state of disarray.  No African youths will ever decline any opportunity to leave this continent that our leaders have associated with backwater.

Africans are fleeing Africa because of

cycle of poverty ravaging the continent….

because of level of unemployment

Each month –nowadays weeks–able and energized African youths leave their families, friends and relations and embark on a perilous journey to Europe through Sahara desert and Mediterranean. Many die or even kill by traffickers in Sahara; dozens drown in Mediterranean and a few make it to Europe –some even got deported. That’s the plight of an African youth.

African leaders are uninterested in these reports because they are suffering what Barbara Tuchman dubbed ‘woodheadedness.’  Is not scaring that no emergency meeting has been called by AU to consider the matter? Is not appalling that no campaign has been started by AU to deescalate this spike? Seriously, Africa needs regeneration. 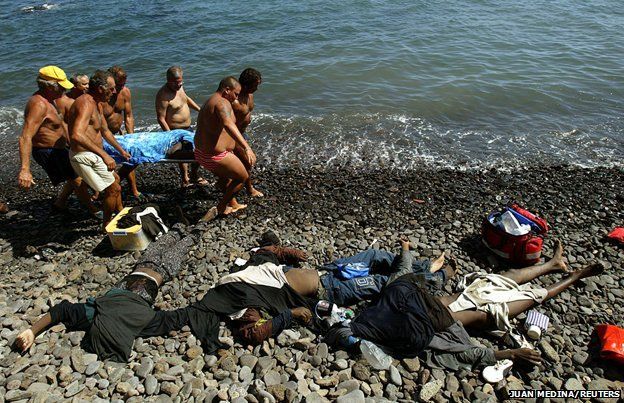 The sea is feeding on desperate migrants

That said, African youths should come to grips that it is only a fool that finds solution in running away from his problem. Africa’s problem centered squarely on leadership and it can only be solved by African youths –so why running away?

Also, wearing the cloaks of hard work and contentment will do!  The mentality for what we Igbo dubbed ‘ego mbute (sharp-sharp money)’ should be jettisoned. You must not travel to Europe or Americas to make it – if Dangote made it in Nigeria, you too can make it here!

One interesting but paradoxical aspect of this migration spike is the crisis it is generating in Europe. European leaders are complaining about this unprecedented influx in immigration forgetting that you cannot beat a child and at the same time prevent him from crying. They are reaping what they sowed –if Gaddafi was alive, the Libyan route wouldn’t have this porous.