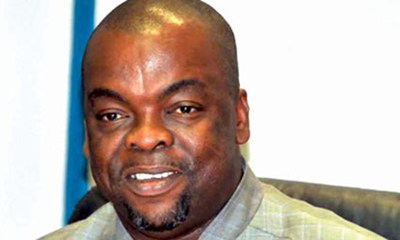 He urged them, rather, to support him to achieve his developmental blueprint for the state.

Chief Wogu made the call at the Government House, Umuahia while answering questions from newsmen after a private visit to the Governor.

He said that the Governor cannot achieve much if he is distracted and called on all to lend their weight behind him.

“I think he should be allowed to concentrate on the development of the state without distractions.”

Chief Wogu, who hails from the Ukwa/Ngwa bloc of the state, said that the Governor should not  be seen as an Ngwa Governor, but Governor for all Abians.

He further advised  that people  should not  demean the office of the Governor.

The former minister who contested  the PDP primaries with the Governor and lost said that there is always one Governor at a time.

He added that as a long standing lawyer, he did not go to court because he knows the limits he can go.

He stated that the Governor has done well in spreading the dividends of democracy to all parts of the state.

He also called on Nigerians to support President Buhari’so administration as it means we’ll for the people.

According to him,  his anti corruption policies as well as his program on security are paying off and expressed optimism that the economy will soon get better.