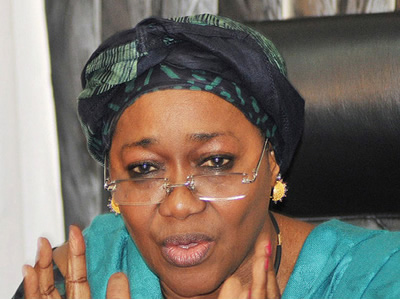 Former Chairman of the Economic and Financial Crimes Commission, EFCC, Dr (Mrs) Farida Waziri [image above] has called for a drastic diversification of Nigeria’s economy through policies that will boost agricultural productivity and industrial output for the nation’s socio-economic development.

She said that the time has come to diversify the nation’s economy from being oil revenue driven to other sectors especially Agriculture.

The former EFCC boss who was the chairperson at the official launch of the Centre noted that the World Bank project is coming to Nigeria at the right time.

Waziri said long years of over-dependence on oil revenue are one of the driving forces of public and private sector corruption in the country.

She said, “No doubt, our over-dependence on oil revenue has brought us to the point where we are as a nation today. As an anti-corruption czar, I have seen how some of those the nation entrusted with its oil resources in the past helped themselves more than the country.

“With our focus on agriculture, the struggle by political office holders to steal oil fund would diminish while the national wealth will be in the hands of the people instead of a privileged greedy few. We cannot all dig oil wells in our backyard but we can all farm in our backyards.

“It is time to end oil-money induced corruption in our land by buying into President Buhari’s vision and take ownership.

“I have made my contributions in the fight to discourage that and even recovered some of the looted funds in billions of dollars.

“For daring to do that, I came under fierce attacks, slander, blackmail and threats but by God’s grace and long years of experience, I survived all. I am glad today that indeed, there is a new sheriff in town.

“I am aware the mandate of this Centre, CEFTER is to promote teaching, research and extension in post-harvest services, enhance agricultural productivity and industrial output for the socio-economic advancement of Nigeria and Africa. I must admit that this can’t be coming at a better time than now when the new leadership of our country is already looking towards agriculture as a more reliable alternative to oil revenue.

“With the strategic location of CEFTER in the food basket of the nation, Benue state and the caliber of hands that have been put in charge to manage the project, I will wholeheartedly seek the support of the federal government, multi-nationals and well-meaning Nigerians and our friends across the country that this is one project all of us should support in the interest of our national economy and economic development of all.”

She added that the support will in no small way reduce the over $4 billion estimated as the yearly post-harvest losses incurred by African countries.

While counseling the managers of the Centre to make dedication and transparency their watchwords, Waziri commended the Vice Chancellor of BENSU, Prof (Mrs) Charity Angya and the Project Manager of CEFTER, Dr Barnabas Achakpa Ikya for their efforts to see the project take off. Benue state University was chosen by the World Bank as one of its 10 Africa Centre of Excellence Project.

Speaking with journalists on the list of ministerial nominees recently screened and confirmed by the Senate, Waziri said the wealth of experience of Nigerians that were nominated as Ministers by President Buhari would go a long way to assist the government in addressing some of the challenges facing the nation.

“This is where I disagree with those who have been condemning President Buhari’s choice of Ministers. No one has been able to fault the integrity and experience of the nominees. The fact that they are ex-this, ex-that means they are exposed and experienced professionals in their own right even though most are politicians.

Experience can’t be bought in shopping malls or super markets. Our prayers at this point should be that the Ministers would live up to their brilliant performances during their screening at the Senate by hitting the ground running to justify the confidence reposed in them by Mr President”, she stated.