Against the speculations of defections making the rounds in the state, members of the Akwa Ibom State House of Assembly, have reaffirmed support and solidarity to Governor Udom Emmanuel, insisting that their support is based on the superlative performance that has characterized his leadership in the state.

The position was made by the Speaker, Barr. Onofiok Luke, when he led his colleagues on the visit to the Governor in Government House, Uyo.

Barr Luke regretted that two of his colleagues are absent due to official engagements outside the country.

He said: “we came with the understanding that we were elected by Akwa Ibom people on the platform of the Peoples Democratic Party and that the leader of that party, His Excellency, the Governor in the state has performed well and we on that platform of Peoples Democratic Party have come to show solidarity because of the performance that he has been able to put on ground.” 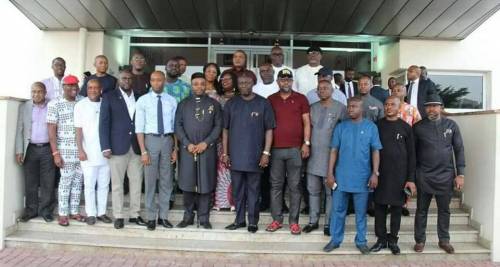 The Speaker, apparently reacting to issues in the political circle in the state, admitted that though there appears to be some setbacks, there was no doubt that the flight would progress to its envisaged destination in peace.

He reiterated their faith in God’s strength and in the leadership of Governor Emmanuel maintaining that they visited to show their total support to him, “so that at a time like this, he is not distracted, and can continue to deliver the dividends of Democracy for Akwa Ibom people.”

As members of the state legislature, the Speaker said, “We were not elected as Governors or members of the House of Assembly to be able to think about our personal interest. We were elected to carter for the well-being of Akwa Ibom people.”

He said that the easiest bet to fulfilling the wishes of their people is their unwavering support to the “Governor who is the vision bearer that he will have the enabling environment to be able to deliver unto Akwa Ibom people.”

“We came here to show solidarity and to show that he is our candidate for 2019, not only our candidate, that we will do all within our powers and all within the law to ensure that he returns to this Hiltop Mansion to complete his tenure as Governor just like every other person did in Akwa Ibom State in 2023.”

Responding, Governor Emmanuel said as a state his people are not distracted, “we are highly focused, our party chairman is here, all of us here were elected on the platform of PDP.”

“We are known to be very loyal people, the Niger Delta people are very loyal, very very loyal and highly principled people. We don’t just move like that.”

He said it was not possible to see a Niger Delta man who is on a canoe in the high sea jump inside the Atlantic Ocean on the basis of a storm.

“So we just want the world to know that we are at peace with ourselves, all is well with us as far as this union, this body is concerned and we leave the rest into God’s hands and then we will see what God wants to do,” he added.

Reaffirming his belief in God, the Governor said, “this is God’s own state, we reinstate our faith and reaffirm our faith in God and God alone,’ adding, “let the whole world know that we are PDP and PDP shall we be.”