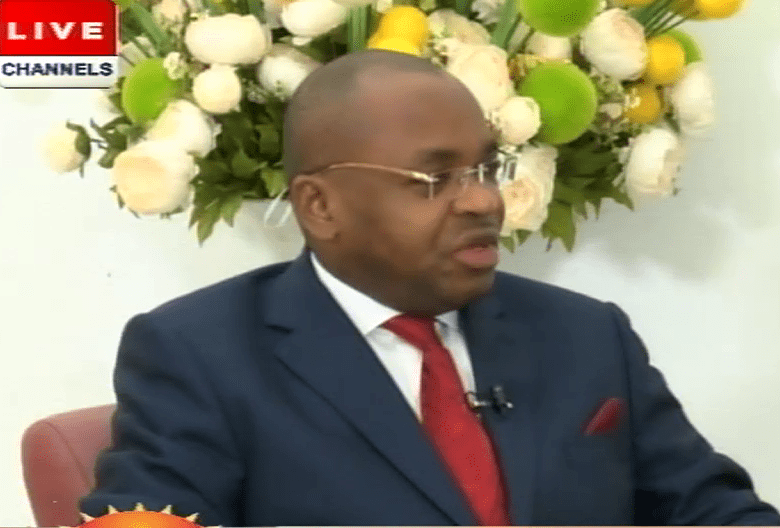 Press Release: The Position Of Akwa Ibom State House Of Assembly On The Brazen Invasion Of The Hilltop Mansion, The Official Residence Of The Executive

Governor Of Akwa Ibom State, His Excellency, Deacon Udom Emmanuel [image above], On Thursday, September 3, 2015, By Operatives Of The Department Of State Security Service (SSS)

On Thursday, September 3, 2015, the very essence of our democracy and our freedom were shamelessly assaulted by terrorists masking as operatives of the department of State Security Service, otherwise known as SSS.

In broad day light and in a fully democratic country where the rule of law is sacrosanct; a special squad of the SSS consisting of operatives from Abuja and a detachment from Uyo, in a commando style, launched a brazen attack on the official residence of our Executive Governor, Deacon Udom Emmanuel.

During the raid, the rampaging SSS operatives broke into rooms and guest houses within the Government House, which is one of the strongest symbols of our confederacy and in the process damaged valuables belonging to the Government and people of Akwa Ibom State.

Since the Constitution has clearly freed the Governor from being brought under court warrant in the discharge of his legitimate duties, it is on record that before embarking on that ill-advised operation, the SSS never communicated with the Governor of Akwa Ibom State, who is also the chief security officer of the state, on why it was necessary to search his official residence in Uyo.

(1) Notwithstanding anything to the contrary in this Constitution, but subject to subsection (2) of this section:

a) No civil or criminal proceedings shall be instituted or continued against a person to whom this section applies during his period of office;

b) A person to whom this section applies shall not be arrested or imprisoned during that period either in pursuance of the process of any court or otherwise;

(3) This section applies to a person holding the office of President or Vice-President, Governor or Deputy Governor; and the reference in this section to “period of office” is a reference to the period during which the person holding such office is required to perform the functions of the office.

It is important to point out that immunity from prosecution and persecution is a well-founded, well-reasoned concept, which has sundry benefits when applied honestly and carefully for the greater good of society. It thus means that a sitting state Governor or President of Nigeria, during the subsistence of term of office, must have a free hand to act boldly and courageously for public good. In doing so, such a Governor or President would not be hindered by fear for self, for repercussion of actions embarked upon, for general public interest of a state or for clearly defined national interests.

Unfortunately, while the President of the Federal Republic of Nigeria, the Vice President as well as the Governors and Deputy Governors across the country are protected under Constitutional Immunity, the Governor of Akwa Ibom State has been singled out and stripped of this right which provided for him under the law.

We are firm in the belief that if the raid on the Hilltop Mansion was not an act of felony, persecution and political vendetta, the DSS would have declared their mission before unleashing terror on innocent workers of Akwa Ibom State Government and or openly declare to the authorities in the state what they found and what they took away from our Government House.

It is only on the media that we get conflicting reports that stockpiles of arms and United States dollars where uncovered.

As lawmakers and representatives of the people, we wish to place it on record that no arms or stacks of money were found in Akwa Ibom State Government House.

If Kano can regulate alcohol, then Ondo, Oyo must have the same…

We also condemn in the strongest terms, the illegal assault on the symbol of our pride and the embodiment of the confederacy of Akwa Ibom State in the Nigerian Federation by the Daura-led State Security Service.

We, hereby challenge the Director General of the SSS, Alhaji Lawal Musa Daura, to tell the people of Akwa Ibom State, Nigerians and indeed lovers of democracy all over the world, why he ordered the ill-fated operation on the Akwa Ibom State Government House.

We, therefore, invite Nigerians from all walks of life to rise up and overwhelmingly challenge acts of impunity by the political class and security operatives in the country, including the State Security Service.

We also invite President Muhammadu Buhari and the leadership of the National Assembly to launch proper investigation into the ridiculous action of the SSS. We are shocked that the SSS which is currently purging officers it claimed to have shown unconcealed partisanship should descend so low to the extent of staging a coup d’état on our governor, simply because he belongs to an opposition party.

“Among free men,” a former American President, Abraham Lincoln, had said, “there can be no successful appeal from the ballot to the bullet; and those who take such appeal are sure to lose their cause and pay the costs.”

Nigerians must resist the rising level of political intolerance and violence that ignore our laws, insult our common humanity and our claims to civilization.

It is very unfortunate that the dominant political players who profess “change and the rule of law” would willingly and so soon fail to walk the talk. They who accused others of impunity are now by their own conduct condoning impunity.

We advise that our politicking should exclude looking for scapegoats and or conspiracies, because at the end, violence breeds violence, repression brings retaliation, and only genuine democracy, reconciliation and the rule of law would unite our country and prosper our people.

As a people with an abiding love for our fundamental human rights and liberties as enshrined in the Constitution, we must not just show revulsion to the rape on Akwa Ibom State Government House.

We must as Nigerian make concrete commitment to work together, irrespective of our political, ethnic and religious backgrounds, to defeat the enemies of peace and the rule of law in our midst.

It is, therefore, on this note that we pledge that the House of Assembly and indeed the people of Akwa Ibom State will take every necessary action within the law, to protect and preserve our federacy in the Federal Republic of Nigeria.

May the spirit of democracy and good governance ring from north to south and from east to west.

Nigeria: Becoming a True Giant of Africa – How?