Amaechi Vs Wike’s Rivers State: The madness slinks to the usual arena? 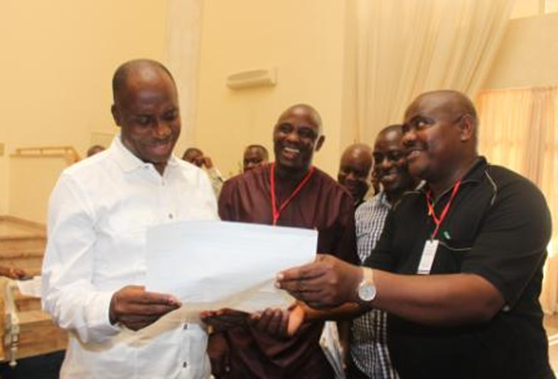 As reported in the media, the immediate past governor of Rivers state, Chibuike

Amaechi [pictured above with Nyesom Wike when the ground was still level] has dragged the Rivers state chapter of the Peoples Democratic Party (PDP), its Chairman, Chief Felix Obuah, and two others to an Abuja High Court over allegations that he embezzled and operated a private foreign account where he lodged funds belonging to the state to the tune of $757 million while in office as governor of the state.

Whether anybody wants to hear this or not, Amaechi is the man unusual and this is not praise singing. He would always be remembered as the man (bold/smart) who despite his travails has always played on the laws of the land believing that the Court is the final spot to settle issues particularly matters that border on political differences.

Is it not interesting that while most politicians including those from Rivers state are running from the Courts, Amaechi is providing what seems like an excellent opportunity for his accusers to hang him – if they are truly motivated by truth and not unjust mutilation of his posterity and further contribution?

The Rivers State PDP on August 6, and August 21, 2015, had alleged that Amaechi stole the sum of N80billion and $757million of Rivers money and stashed them in foreign accounts in his name in banks including Bancorp Bank in Minnesota, United States of America and a bank in Switzerland. The Rivers PDP claimed that revelation of Amaechi’s various foreign accounts were made by Christiane Amanpour of America’s Cable News Network (CNN) in some episodes of her programmes. It was also alleged that the US-based bank had revealed to President Muhammadu Buhari that part of the money lodged therein were meant to purchase a house for him (Amaechi) in America.

However, the former governor in this fresh suit filed before an Abuja High Court, FCT, stated that “each of the said malicious publications by the defendants (PDP, Felix Obuah and two others) are untrue, false, motivated by ill-will and without any foundations in truth whatsoever and further avers that the defendants made the said libellous publications after the PDP failed in the presidential election and with a view to rubbishing him in the eyes of right thinking members of the society and the persons.” He noted that part of his worry is that the defendant (PDP, Obuah and two others) had further circulated the alleged malicious publications that exposed his person to ridicule, public odium, contempt and disparagement in the eyes of right thinking members of the society. The former governor is demanding N300 billion as damages for harms which he claimed the allegations had done to his person.

It is an absurd argument for some people to say the former governor should have gone to the Wike’s investigation panel to clear himself rather than going to court. Does Amaechi need the outcome of a panel to fight against the defamation of his character? The answer is no! He has simply taken his fundamental human right to sue those defaming his character. So why hate him for doing so? If those accusing him are so sure, let them go to court to establish their case with facts and figures.

This is not defending Amaechi but a reminder that we should not muddle up every issue in the dirty water of political smear campaigns. The tragedy of it is that we end up just throwing mud and shouting for nothing without achieving a single step as progress in correcting the wrongs of our leaders past and present. Even if Amaechi had misappropriated the state funds, the way and crude manner state government and PDP officials were talking in Port Harcourt could best be described as very counter-productive to the genuine interest of the battered and short-changed people of Rivers state.

The campaigners including Governor Wike and Chief Obuah seemed to be more interested in destroying Amaechi’s integrity and credibility than even recovering whatever fund that was alleged to have been stolen by the former governor. This is the truth! The incumbent governor and the entire Rivers state PDP have been using Amaechi’s name to seek political support and acceptability from the people and the powers that be at the centre. This is true also!

Let me ask: Is stopping Amaechi from getting an elite posting in the Buhari government more important to Rivers people than recovering the hundreds of billions Naira which the new gang in Port Harcourt is accusing him of stealing? It is baffling how the minds of our people work! Let’s even look at it, what has Wike and Obuah done since May 29th to reach out to the banks they alleged these monies were stashed since they have convincing evidence? You see deceit! When are we going to wake up our ideas and introduce some creativity in governance in this country? Any sensible Nigerian would know that what is happening in Rivers state is all aimed at destroying Amaechi, and if PDP had won the election, he would have been on the run except he wants to be a dead man or a vegetable tucked- off in an obscured corner of Bauchi or Buguma prisons.

Everything thrown on Amaechi as it stands today remains mere accusation. If PDP government in Rivers state had real facts, they wouldn’t waste time setting up panel of enquiry to dramatize the issue of looting as claimed. They would in fact have started under the Jonathan administration to publish details of cases alleged to be frauds and corruption, but they did nothing, only waiting that Jonathan will win the election so that they can send him to the gas chamber.

The question is: did The Bancorp Bank, Minnesota, United States, at any time write or communicated with President Muhammadu Buhari in whatever form over this said sum of $757million allegedly looted by the former Rivers state governor as publicly claimed by the Rivers state government?

If actually all that has been said about Amaechi’s plundering of Rivers state funds were concrete and genuine, what has stopped his accusers from taking such evidence to the appropriate authorities to slam charges against him, instead of just accusing him for mere political gains? From May 29th to this day, how many months have gone? Abeg make una go sit down!

Since Amaechi has refused to subject himself to Wike’s probe panel, insisting it is not a regular court of law, this court action is a life line for Wike and PDP as it presents an opportunity for them to prove that Amaechi is actually guilty by showing concrete proofs to that effect. Amaechi has taken up the gauntlet and it is now left for PDP to match him in court. The era of unsubstantiated ranting is gone. For me, this Amaechi’s court action is a good avenue for PDP to present all the evidence they have to proof their allegations against him. This is exactly what Amaechi needed to do to clear his name. God bless Rivers state!

Commentary on speech by Obiano: “My dream of a new Anambra”