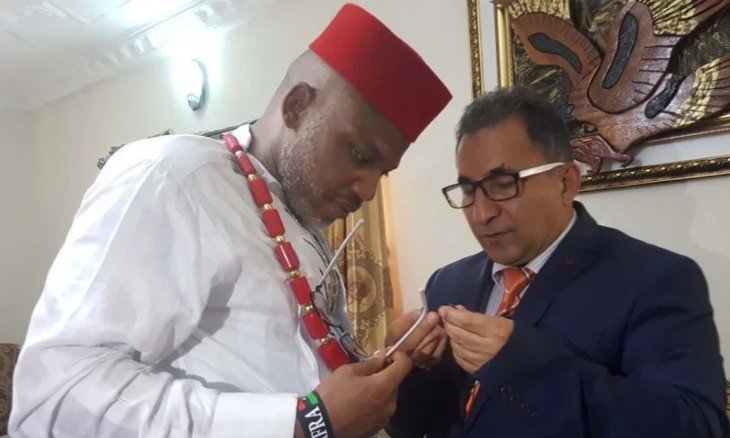 We the family members of the Indigenous People of Biafra (IPOB) and its leadership worldwide under the supreme command of Mazi Nnamdi Kanu the prophet of our time, wish to clarify that the DSS/Ministry of Information engineered speculation regarding the position of our leader is a cheap diversionary tactics designed to test our dedication and resolve in the run up to the much anticipated boycott of Anambra elections on Saturday November 18th, 2017. Not minding the involvement of two key ministries of government in the propagation of this falsehood, we remain fiercely resolute and undeterred by the crude antics of a drowning government. They have lost every sense of shame. The only option left open for them is to periodically opt for hyper-dramatics in an environment devoid of any form of investigative journalism.

By seeking to deflect attention away from multiple fronts of attack IPOB have subjected the Buhari regime to, DSS and their propaganda arm, the Ministry of Information came up with this laughable concoction about the dismissal of our leader, which they know, even by their own very low standards of news management, is so hilarious that no sane mind will believe it. Biafrans and the entire humanity knows that Mazi Nnamdi Kanu was abducted by Nigerian soldiers on the 14th September 2017, therefore no amount of fake stories about our leader and our movement planted through government friendly media houses, will dent our resolve to restore Biafra. Mazi Nnamdi Kanu, the only person with absolute command over entire Biafra restoration effort, remains the rock upon which the entire edifice of IPOB is built. The preposterous and laughable idea that he has been sacked from Radio Biafra he personally established in London and IPOB he founded is tantamount to saying that the Sun is no longer part of the solar system. It is not only unthinkable, it will be foolish of anyone to contemplate it.

The world can now see how the Caliphate cabal is running Nigeria through fabrications and unadulterated falsehood in the hope of twisting the minds of the gullible and the easily deceived. For anyone to believe that faceless hitherto unheard of individuals can wake up one evening and announce the replacement of a man that commands 50 million people with presence in over 100 countries of the world, making him only second to Pope Francis as the personality with the largest cult following on earth, is plain stupid. Anybody who peddles or believes such a story needs his or her brain examined. This is another classic DSS engineered subterfuge that fell flat on its face as all on their previous efforts to rubbish the personality of Mazi Nnamdi Kanu did. Many more weird and ludicrous stories will emerge in the coming days. The more IPOB applies the pressure, the more bizarre the antics of this shambolic APC Government becomes.

No amount of fabricated falsehood or carefully packaged lies by DSS and Lai Mohammed’s Ministry of Information will ever erase the fact that Nigerian soldiers last September invaded Kanu’s compound and abducted him. The Minister of Defence Mansur Dan Ali on Channels Television admitted during an interview that troops went in search of our leader in his home without court warrant in a supposed democracy. This invasion led to the death of 28 people shot by Nigerian soldiers. It doesn’t take much to understand that fake stories is part of the strategy of government to stop people from asking them where Nnamdi Kanu is. By regaling the gullible few with wild stories such as the sacking of our leader, they hope to cheapen a very serious matter of abduction and possible extra judicial execution. We advice the discerning public to disregard such junk news and continue to demand for the whereabouts of our leader from the Buhari regime.

We must not forget the case of purported splinter groups set up by DSS such as REIPOB, TRIPOB, RENIPOB, SEXIPOB etc. Non of them made it from newspaper pages into the re

Super Eagles Fight From Two Goals Down To Beat Argentina