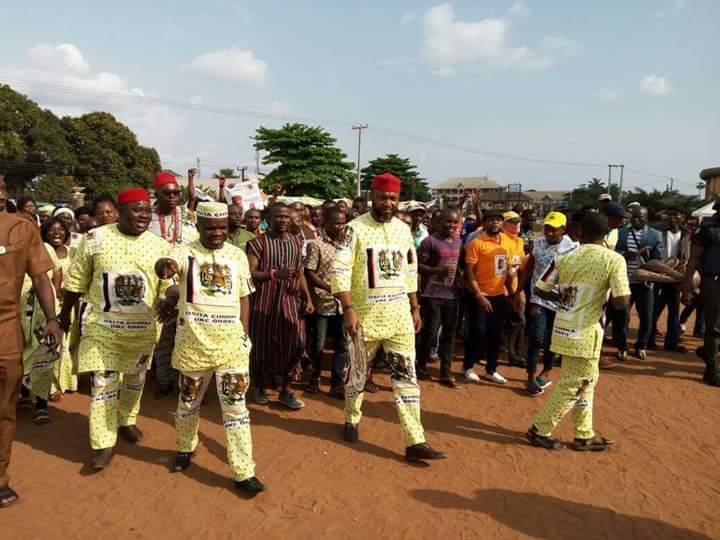 …says only 10% of registered voters belong to a political party

With barely three weeks to the much talked about November 18,2017 governorship election in Anambra State, one of the key front runners and candidate of the United Progressive Party (UPP), Chief Osita Chidoka has now unveiled his programmes for the citizens when elected.

He also expressed faith in the ability and capability of INEC to conduct a free and fair governorship election in the state, having assured the nation that a point-to-point electronic transmission of polls results would be adopted henceforth, beginning with the Nov 18 poll in Anambra state.

The youthful candidate who presented the 100-page well articulated document that included his vision, fundamentals and philosophy of the administration, together with detailed sectoral work plan before a large assemblage of journalists described his analysis, campaigns, and proposed government to be data-driven.

He premised the key indices under the acronym of KNVES, which means, Knowledge, Vision, Execution and Sustainability.

When taken on the possibility of his opponents cloning the document, Chidoka described it as not likely because it would be too obvious as the vision and ideas remain personal and passionate to his heart, even in the execution.

Besides, in a unique show of open mindedness, he admitted readiness to avail his expertise to whoever wins and approaches him for advice, if he fails to win. All in the interest of the citizens of our dear state, he disclosed.

For the education sector, Chidoka intends to “create a functional education system that would benefit all. Create a reform team to assess and formulate policies to drive the sector and restore the state to its glorious past.

“A situation where the inspectorate division of the Ministry of Education lacks vehicles and other logistics to do their job, and therefore do not go on any inspection. Instead, when they go at all the schools they visit take responsibility of providing their transport, feeding and other needs is unacceptable.

“We will create the Internet facilities and connect all schools to the digital communication network and provide a single portal on education in the state, whether public or private school. There would be regular inspection and supervision of all schools to maintain standard…,

“We will provided the students with the Anambra laptops to ensure they are fully in tune with the digital Internet communication age …”, he added.

He said his detailed work plan as included in the manifesto comes with target plans, expectations, goals and execution period with no time to waste by any official.

That attendance at campaign rallies, Chief Chidoka observed, were actually found to be the same people who turn out for what they would be given at the end of the day. But that UPP remains the only party that doesn’t give any money. That the huge crowd that regularly throng their events were persuaded by the conviction of their sincerity and proposed programmes.

Reeling figures and figures, the UPP flagbearer disclosed that records show that only about 10% of registered voters in the state actually belong to one political party or another. That UPP has become the only party that adopted multiple channels of reaching all registered voters in their villages, Wards and homes, having created cells in all electoral Wards through which the party maintain regular and immediate contact with eligible voters and citizens.

Chidoka urged all voters to be reassured that the state needs a governor that is on ground, knows and feels their pulse who is sober and not an aloof personality who never bother about tomorrow only when election suddenly dawned on him. “Our plans for citizens especially the youths are robust as our strategy is to empower human beings.

He also spoke on the recent shifting of cooperation hitherto being extended to his party by a group -the Movement of Biafrans in Nigeria(MOBIN). He wanted the members to ask introspectively what the All Progressives Grand Alliance(APGA) had done for Biafrans to earn their support.