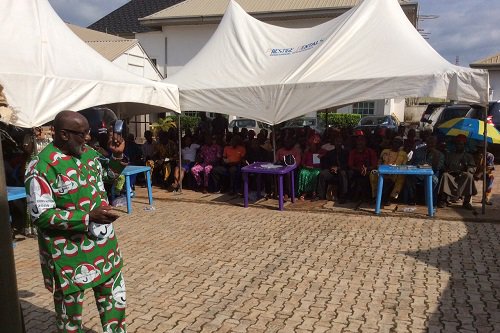 Speaking during the event, leader of the group, Mr. Shedrack Anakwue, said their decision to join Mr. Obaze’s campaign was influenced by their desire to support the best and most qualified candidate and a party that is widely tipped to win the election.

He said the number that attended the event was only a select few as many more were out in the field.

In his remarks, Mr. Obaze, a former United Nations official and the immediate past SSG of Anambra thanked the visibly excited group for its timely support reminding them that the party now has the best opportunity to win Anambra State.

The Public Policy expert restated his commitment to keying Anambra State into the Sustainable Development Goals (SDGs) of the United Nations by reviving the Anambra Integrated Development Strategy (ANIDS) used by the Peter Obi administration to achieve the MDGs but abandoned by the current government.

In his words “the problem of most government in Nigeria including the current government in Anambra State is that government policies are transaction-driven not public-interest driven, governance is about adding value and service delivery”.

He further stressed that no community will be left behind in his administration insisting that he will conduct local government elections in the State in the first six months in office if elected.

Receiving them, a Chieftain of the PDP and former Commissioner for Information Anambra State, Chief Joe-Martins Uzodike, commended the group for making one of the wisest decisions in its recent history urging them to go out to the field and work for the success of the party at the forthcoming election.

He told the group that they will be officially received in a formal event organized by the party soon.

The Homicidal Rhythm Of The Python Dance ~ By Femi Fani Kayode

PHCN, Nigeria and “Management of Change” Process – By Peter Obidike