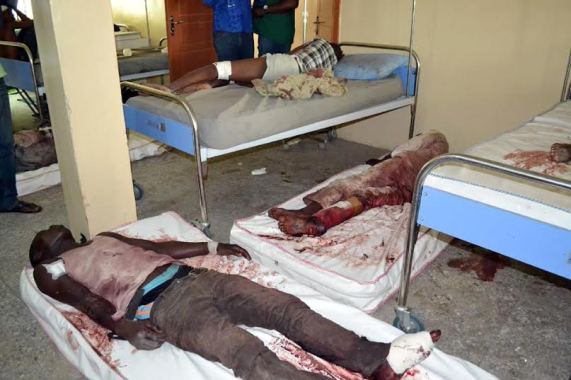 Photo shows some victims of a Maiduguri multiple bomb blast

About two female suicide bombers have detonated Improvised Explosive Devices (IEDs) in another Maiduguri bomb attack on Friday morning killing at least seven and injured 17 others.

At least 36 people have been killed in multiple suicide attacks in northeastern Nigeria’s Borno state at a mosque and a residential building, police and medical sources said on Friday.

A twin suicide bombing at a mosque on the outskirts of the state capital Maiduguri killed around 29 people late on Thursday, a medical source said. A police spokesman put the toll at 14.

Around six people were killed by another suicide attack on Friday morning near the earlier bombings, but not at a mosque, a spokesman for the National Emergency Management Agency said. The bomber was also killed, while 17 people were wounded.

No one has claimed responsibility for the attacks but they bore the hallmarks of the jihadi movement, which has been trying to carve out a state in the northeast of Africa’s most populous country since 2009.