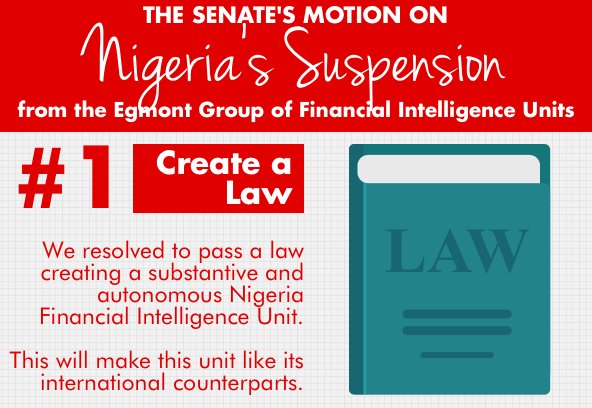 The Senate, on Wednesday, resolved to pass a law to establish a substantive and autonomous Nigeria Financial Intelligence Unit (NFIU), following the suspension of Nigeria from the EGMONT Group.

This is in-line with its commitment to support the anti-corruption agenda of the President Muhammadu Buhari-led Federal Government.

Elombah.com had earlier reported that the Canada-based Egmont Group had suspended Nigeria after several attempts to get it to grant autonomy to NFIU failed.

However, Senator Chukwuka Utazi who sponsored ‎said the interference of Ibrahim Magu, acting chairman of the Economic and Financial Crimes Commission (EFCC), in the affairs of the NFIU is another reason Nigeria was suspended.

Consequently, ‎the Senate resolved to enact a law that will grant autonomy to NFIU which is under supervision of EFCC.

The EGMONT Group is a network of 152 Member Countries that share information relating to criminal intelligence and financial investigations that deal with money laundering, terrorism financing, proliferation of arms, corruption, financial crimes and economic crimes.

Several news reports have stated that President Muhammadu Buhari’s anti-graft war has suffered a massive set-back with the suspension of the Nigerian Financial Intelligence Unit (NFIU) from the EGMONT Group.

In the event of an eventual expulsion — following its current suspension — Nigeria will no longer be able to benefit from the financial intelligence shared by the other 152 member countries of the group, which includes the United States and the United Kingdom, which will significantly hamper its abilities to recover stolen funds that are stashed abroad.

This is why in a quick reaction today, the Senate adopted a multiple point resolution that called for the establishment of an independent NFIU, and the empowerment of the unit to be able to exchange and relate with all countries on the issues within its mandate at bilateral and multi-lateral meetings.

Additionally, the Senate’s resolution called on the Ministries of Justice, Finance and Interior to work to ensure that Nigeria’s suspension is immediately reversed and ensure that all the conditions set by the EGMONT Group are met to re-admit and improve Nigeria’s standing within the Group.

The Senate also called on the Executive branch to ensure that it includes a separate budget for the NFIU in any supplementary budget that it sends to the National Assembly before the end of the year, stating that this will ensure that Nigeria’s suspension is lifted as soon as possible.

In his comments, President of the Senate, Dr. Abubakar Bukola Saraki, stated that separating the NFIU from the EFCC will show that we are serious about this anti-corruption fight.

The Senate President further called on the Senate to begin the process of enacting the law.

“We must make sure that the suspension is lifted,” Saraki said, “The earlier we get it lifted the better it is for our image and the sooner we can restore our standing internationally.”

Senator Foster Ogala (Bayelsa West), stated that the expulsion of Nigeria from the UN-backed EGMONT Group would spell doom for Nigeria, while also urging the Senate to initiate the passage of the NFIU Establishment Act in order to ensure that it contributes its own significant quota to fighting corruption in Nigeria.

The Senate further directed that its Committee on Anti-Corruption should begin working on a Bill and present it to the full plenary within 4-weeks. 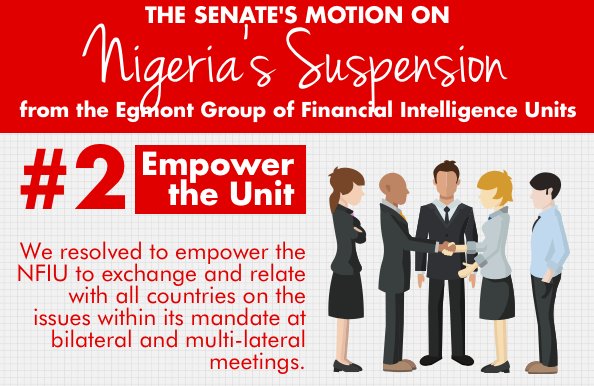 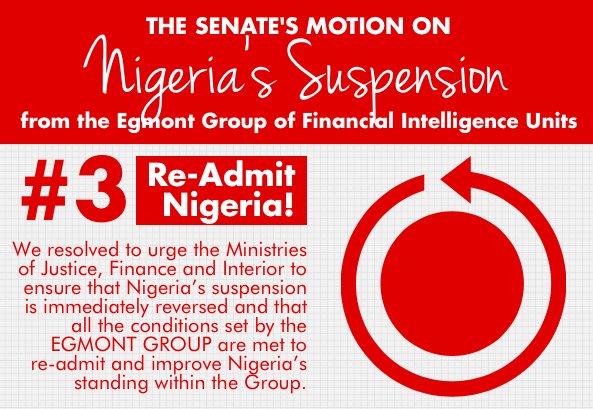 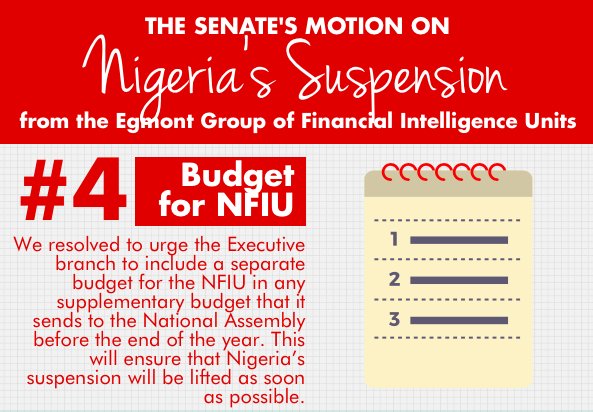 What Are We Restructuring? ~ By Olusegun Adeniyi