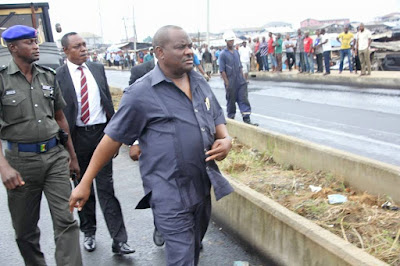 Rivers state chapter of the All Progressives Congress (APC) says Nyesom Wike [pictured above], the Peoples Democratic Party (PDP) candidate whose victory at the April governorship election was nullified on Saturday by the state governorship election petition tribunal, is “planning to run away”.

The Rivers State Tribunal sitting in Port Harcourt has removed the governor, Nyesom Wike and ordered fresh elections in the state.

The judgment of the Tribunal reads in part: “We hereby order INEC to conduct fresh elections.

“We are in agreement that the evidence of the witnesses of Wike and INEC is incredible and unreliable. We are satisfied that the petitioners have proved their case.”

APC however said it had been vindicated in its persistent claim that the election was a sham and that the Independent National Electoral Commission (INEC) erred in declaring Wike governor.

The party maintained that there was no way under the heavens that Wike could have defeated its candidate, Dakuku Peterside, in a free and fair election.

“Though, we were expecting total ban of Chief Nyesom Wike from further participation in the politics of Nigeria seeing the orchestration of the number of death of Rivers State people in order for him to be installed as a Care-Taker Governor, all the same, we thank the Justice Mohammed Ambrusa-led tribunal for restoring hope to the downtrodden people of Rivers State who have borne the brunt of Wike’s illegal and visionless administration in the past five months,” Rivers APC said in a statement issued in Port Harcourt.

The statement was signed by its chairman, Davies Ibiamu Ikanya, immediately after the tribunal judgement.

But addressing journalists after the judgment delivered by Justice Suleiman Ambrosa of the Rivers State Governorship Election Petition Tribunal, Counsel to the PDP, Chris Uche, SAN, declared that Governor Nyesom Ezenwo Wike remains Governor until the appeal processes are exhausted.

He said the nature of the judgment delivered by Justice Ambrosa-led Tribunal makes appeal vital as the new position adopted by the tribunal must be tested in the interest of justice.

Uche noted that the tribunal’s reliance on card reader accreditation to nullify the governorship election when evidence was led by both the Respondents and the petitioners that both card reader and manual accreditation were used for the election requires testing at the Court of Appeal.

He noted that it was shocking that less than 24 hours after lawyers on all sides submitted nine written addresses and documents, the Tribunal sent notice that judgment would be delivered on Saturday morning.

In its judgment, Justice Suleiman Ambrosa ruled that the card reader accreditation was vital to the election and the votes recorded. He said that the press statement issued by INEC on the matter supercedes the Electoral Act as the card reader was a new introduction thar was aimed to promote transparency.

He said on the balance of probability, he is inclined to belive the petitioner witnesses ahead of the witnesses of the Respondents.

The tribunal declared that testimonies of the 56 witnesses called by the petitioner were enough to cover the entire state of 5972 polling units and points.

Wike plans to run away – APC