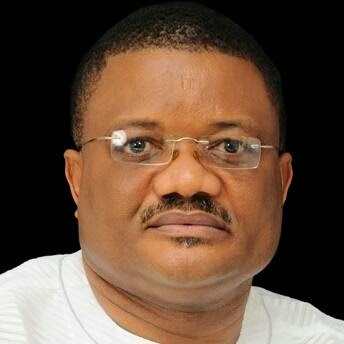 An All Progressives Grand Alliance [APGA] chieftain, Mazi Ochiagha Reagan Ufomba has scolded the governor of Anambra State, Chief Willie Obiano over the manner he is running the party’s affairs.

In the letter, he admonished him to:

– Make moves to bring Chekwas Okorie back and make him BOT chairman, amongst others.

Mazi Ufomba further warned Obiano of the consequences of his actions if he doesn’t retrace his step.

Read his letter below.

MY OPEN LETTER TO GOVERNOR WILLIE OBIANO: OUR APGA, YOUR PARTY

Permit me to write you from the bottom of my heart as a critical stakeholder of the All Progressives Grand Alliance, APGA.

And as one deeply concerned about the wrangling in the party, especially the noisome pooh-pooh between you and your predecessor, Mr Peter Obi, as he would like to be addressed.

I have followed these altercations with utter disbelief, dismay and rude shock. To say the least, I wish to state unequivocally that I am thoroughly embarrassed and disappointed.

You would agree with me that this is my first contact with you since you became governor at great cost and sacrifice to Peter and several others, including yours truly.

This version of the story of your ascendancy to government house Awka might sound strange and utopian to you; especially as virtually everyone you met on the way to your exalted position or right inside government house had presented a graphic detail of how they also made you governor of Ndi Anambra.

Don’t lose your temper yet, as presumptive permutations and vain glories are part of this game called politics. Success, you know, has many fathers while failure is an orphan.

I am therefore not surprised at all that every tom dick and harry has a sweet nonsense taboo to tell.

What is crystal clear in the whole cocktail of self-exaltation is that had you lost in the bid to becoming governor only one person would have become the vanquished.

That person is Mr Peter Obi.

I shall return to this topic later in the course of this letter which is not set out to praise-sing for anybody, but intentioned to prick your conscience, and provoke your sense of loyalty, while setting the records straight.

May I once again state that I am greatly disturbed at the turn of events between you and Mr Peter Obi who kept sleepless nights and made costly sacrifices – while incurring the wrath of his friends and many party loyalists, to make you governor.

I have followed with utter dismay the misguided and unfortunate cantankerous name-calling, mudslinging, blackmail, bare-faced lies and hate that is the pay back package to Obi.

This is least expected, and the direct opposite of what, ordinarily, should be a very chummy relationship. How did we get here ?

The Peter Obi Nigerians know is a non-quarrelsome person, an unassuming primus inter pares in the committee of past and present governors.

But for his ‘aradite-ism’ Obi would have been a darling to all who love to hate him. You know what I mean?

I am privileged to have read your first interview as a governor, where you described your relationship with Peter at the high school.

It was a wrong scholarly lesson in party loyalty. After reading that interview, I knew that a day like this must come.

In politics, the Boss is never subordinated and hardly  wrong. While the 48 laws of power warns us ‘’never outshine the master’’.

I therefore hasten to ask, is the problem in us as Ndigbo or in our stars?

From Abia to Ebonyi, Ebonyi to Owerri, and from Anambra to Enugu, the story of disloyalty and backstabbing and use and dump stinks.

By all intent and purposes, this letter is not intended to pass judgement or apportion blames, or serve as anyone’s megaphone, but to remind us of where we are all coming from, the roles expected of us as leaders, so as to know where we are headed.

The letter itself would not have been necessary, in the first place, if you had not inspired me with your Economic Recession Package for Ndi Anambra.

Going by what I avidly read, you strike me as one with a vision and capacity to drive processes given the right frame of mind, advise, and rancour-free operative environment.

Which makes it urgent and imperative that you cut off the cancerous four fingers that keep pointing at you each time you point just one clean finger at Obi.

I have therefore elected to intervene by appealing to you and your conscience to, please, leave Peter Obi alone.

My heart truly bleeds as I make this solemn appeal. Peter Obi may not have been a saint, and nobody is, but he did well for Ndi Anambra.

To my mind, the easiest way to incur the wrought of the people is to keep fighting things they cherish.

Whether Peter Obi left N75 billion or not, one thing every Nigerian knows is that he left government house for you. And this places serious moral burden on you.

Going by the tenets of the Electoral Act and the Constitution of the Federal Republic of Nigeria, he may never come back to vie for the governorship again with or without you.

He can only be a value-addition to your future endeavours or a spoiler. I prefer the former. I know you do too.

Consequently, your boys must stop attracting negative press to you by attacking Mr Obi, justly or unjustly.

A son of a useless father cannot be better than the father, I don’t want to use the word ‘useless’ too.

It is only a fool that says the mother’s soup is not sweet. For a community that spends so much time and energy destroying their giants will grow up never having giants or becoming gigantic.

Peter Obi’s political journey has just begun. I have God’s assurances on this.

Prior to your election as governor, ‘Our APGA, your party’, had been in the trenches fighting wars of attrition.

You were made governor from the ashes and ruins of these wars. Like everything lifeless Obi breathed life in this ash. And here we are today.

I am disturbed that this bug has not left us; and fears that we are about to fall victim of the famous Igbo idiom that says “Ma Nwata ajughi ihe gburu nnaya, ihe gburu nnaya egbuo ya”.

But who would tell you of “ihe gburu nnagi” if we are at war with ndi eze nmuo, and building walls instead of bridges?

Your governorship did not fall from heaven. Peter Obi and, the Bishops, your God and Ndi Anambra, and of course, the conciliatory spirits of Chief Victor Umeh and Maxi Okwu made you governor.

After our usual stakeholders meeting at Awka, which held regularly with Mr Peter Obi, which you had jettisoned, he called me very late at night, wanting to know if I had left Awka or still around.

That was around 1.30am. I told him I was still around. He requested that I see him at the governor’s lodge early in the morning before 5am. I obliged him.

An early riser myself, I had arrived governor’s lodge at about 4.30am with my boys who had hardly had a sleep only to see Peter Obi already awake and jogging.

As soon as he sighted me, he stopped his morning walkout, walked towards me, and we both sat on the pavement outside the governor’s house.

In summary, Mr Peter Obi wanted my opinion on the election that brought you to power vis-à-vis the problems bedevilling the party at the time.

He was prepared to make sacrifices, forgo his pride and reputation, including the withdrawal of all pending cases in court, so as to pave way for genuine reconciliation of all factions within the party, so as to make you governor.

‘’Ochiagha what do you think’’ he asked in conclusion.

From the moment Mr Obi raised this disturbing issue, my respect for him grew in leaps and bounds and may remain for a long time irrespective of whatever his shortcomings are.

As expected, I had advised that we toe the path of peace by reconciling all warring and aggrieved factions within the party, so that Ndi Anambra can have a rancour-free election, and by extension you.

This accounts for the reason Mr Peter Obi did not appeal the famous Enugu judgement in favour of Victor Umeh. Instead, a National Reconciliation Committee headed by me was instituted.

I hereby give you unsolicited, the same advise.

The committee headed straight to Chief Victor Umeh, in Enugu. Umeh spoke passionately and extemporaneously about the party for four hours.

Chief Maxi Okwu whose election was monitored by INEC was all for peace while seizing the reconciliation initiative in the interest of the party and Ndi Anambra and your governorship, primarily.

Suffice it to say that another team led by Barr Ziggy Azike had their hand in the plough simultaneously.

It was this National search for peace and reconciliation, and its eventual actualization that gave birth to what is today known as the famous “Kiss” of Peter Obi and Victor Umeh on National Television as well as your governorship.

This hard won peace has eluded the party, or so it seems. Where are these APGA faithfuls today?

Where are the 18 of the 28 old member NWC you  inherited?

The list of woes and desertees is endless. Politics in APGA has ceased to be a game of numbers but that of exclusion.

I have been wondering why Dr. Tim Menakaya or Peter Obi or Bianca or even Umeh did not succeed our departed leader Dim Odimegwu Ojukwu as National leader.

These men know the banana pills and various landmines within the party.

Similarly, I have continued to wonder why our pride has not allowed us to reconcile with Ojeozi, Chekwas Okorie so as to seriously regionalize, and then nationalize the party.

Is it not high time we begged Chekwas to return the soul of our dying party? Is it too big to offer him the BOT Chairmanship while you remain as governor? I would do this as…

Given the right tendencies APGA can still go places, but you seem to have appropriated the party and everything to yourself.

Or are we satisfied with running in splinter and pieces and Anambralization of the party?

Deep down me, my sense of patriotism and responsibility tells me that you owe so much gratitude to Mr Peter Obi, and (y)our APGA.

So much so, that you must take urgent steps to stop the drift, fill the yawning gulf, mend broken walls and hearts and fences.

If not for anything else, but in the interest of your seamless re-election!

If this advice is not heeded, and urgently too, you might realise albeit too late, that it is better to have 10% of something than 100% of nothing; and that no one has ever and successfully clapped with one hand.

This is one truth no one may ever tell you.

May God bless you as you ponder over this.

Mock President Buhari says Nigeria is not in recession [video]