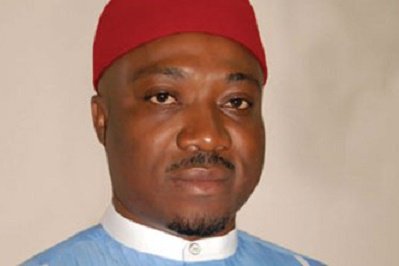 Ozo Nwabueze Okafor has emerged the acting national chairman of the All Progressives Grand Alliance [APGA].

Chief Jerry Obasi, the Deputy National Secretary of APGA had issued the suspension release about the suspension of National Chairman Ozo Victor Oye to the press on behalf of the members of the National Working Committee of the party.

Commenting on the recent developments in the party, Chief Obasi said:

“The party had its NWC meeting.

“The Meeting which was duly convened by the suspended National Chairman Ozo Victor Oye had all the NWC members in attendance and was presided over by Oye”.

He told APGA Forum that on course of the meeting, a motion for the suspension of the National Chairman and Deputy National Chairmen North and South was moved.

“About 13 NWC voted in favour of the suspension, 3 members refused to vote and 5 members voted against the suspension”, Obasi stated.

Immediately, the members voted for the suspension of the 3 officers, Ozo Nwabueze Okafor who is the National Vice Chairman East was appointed the acting national chairman of APGA pending the ratification of the decision of the NWC by NEC.

He also directed the committee to probe further the allegations of gross misconduct against Ozo Victor Oye and the two other National Vice Chairmen.

The New acting APGA National Chairman was a local govt chairman, and emerged the National President, Association of Local Governments of Nigeria (ALGON).

He was also the senatorial candidate of APGA in the last general election. sell dumps