Senate on Wednesday  resolved and ordered  its standing Committee on Ethics, Privileges and Public Petitions to probe reinstatement of the Deputy Commissioner of Police,  Danjuma Ibrahim ,  charged with 2005 Apo six murdered  to Police force.

Senate decision was sequel to  point of order raised by  Senator Ogbuoji Sonni who expressed dissatisfaction to reinstatement of Danjuma into police force despite willfully killed those people. 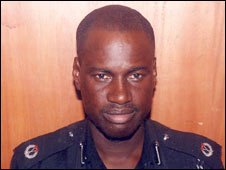 Ogbuoji said the reinstatement of Danjuma has generated a lot of tension among the people who were killed.

According to him,  sometimes in 2005, there was an incident that led to killings of six young people at the police check point. The then President set up panel of enquiry to look into the matter when Nigerians were satisfied with the Police report on the matter.

“The commander of that particular police unit, one Danjuma Ibrahim, as we speak today, has been reinstated by the police.

“Also, one of them,  Othman Abdulsalami is still at large. “

Responding,  Senate President,   Bukola Saraki referred the matter to Senate Ethics, Privileges and Public Petitions to look into the matter

It could be recalled that Danjuma and four other officers were tried for the killing of the traders between the night of June 7 and 8, 2005.

They had spent some time at a club on Gimbiya Street, Area 11, and were returning to their home in Apo neighbourhood when they encountered some police officers that fired at them.

The police had initially said that the victims, whose were between ages 21-25 and included a woman, were armed robbers.

But a panel set up by President Olusegun Obasanjo to look into the disputed most of the account by the police and recommended Mr. Danjuma and his men for trial.

All the officers were immediately placed on suspension by the police.

Twelve years later, two of the officers were convicted and sentenced to death, but the FCT High Court presiding judge, Ishaq Bello, said there was no evidence to convict Mr. Danjuma and two others.

Nigerians Stranded In Libya Will Be Brought Home —Buhari