Are Victims Of Terror Perpetually Terrorised? 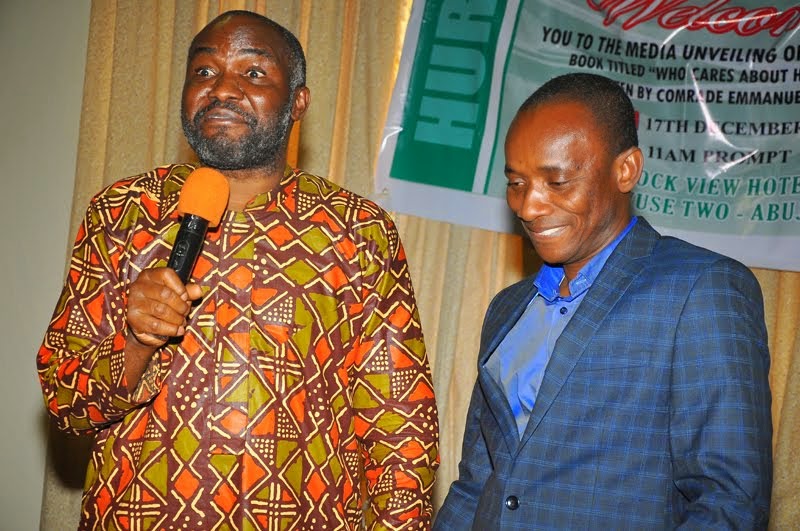 [Image: The author, Emmanuel Onwubiko (left) at presentation of the book who cares about human rights?]

I have had the rare privilege to have served as a member of the Presidential Committee on Dialogue and restoration of peace in Northern Nigeria for two years under the immediate past Federal administration and my major thematic area of interest was on the challenges confronting the victims of terrorism in Northern Nigeria.

In that Presidential Committee, yours faithfully represented the organised civil society in Nigeria and for almost two years we held high level but secretive meetings under the able Chairmanship of the then Minister of Special Duties and inter-governmental affairs even as we made several visits to prison facilities where the suspected terrorists are detained awaiting prosecution whereby constructive interfaces took place in a convivial atmosphere.

The gritty and grimy details of my experiences as a panelist in the nine member high profile but very quiet Presidential Committee are topics for another day but suffice it for me to state without any fear of contradiction that I’m not impressed with the ways and manners the Government officials view these unfortunate victims but are always willing to fall head over the hills into the traps of some fraudulent kingpins parading around in the corridors of political powers as negotiators who enjoy direct links with the hierarchy of the armed terrorists known as Boko Haram.

Sadly though, the committee made far reaching recommendations which were passed on to the Government of Nigeria in the immediate past dispensation but the implementation of these recommendations have been caught up by the recent electoral misfortunes that befell the immediate past government because Nigeria isn’t run as an organised political entity whereby succeeding administration picks up from wherever the preceding government stops but in our own clime the government of the day seems to be in a battle royale to discard whatever initiatives and actionable recommendations passed on to it by its predecessor.

The Muhammadu Buhari led Federal government has successfully dislodged the erstwhile holder of the office of National Security Adviser who coordinated the activities around the issues of counter terrorism war and has picked another National Security Adviser who as the Nigerian tradition goes must have originated his modus operandi for carrying on the tasks of the counter terrorism activities or is it counter insurgency activities. But a nexus between the old and new order is their common mistreatment of the victims of terrorism in Nigeria.

Even with the existence of a multibillion Naira Terrorism Victim’s support endowment fund headed by a former Defence Chief retired General Theophilus Danjuma, the affairs and issues around the treatment of the victims of terrorism is still being relegated to the background regrettably but the government seems willing to fall on its knees begging the real terrorists for negotiations with the generous pledges of soft-landing and other financially enticing packages.

Two things have happened under the watch of President Muhammadu Buhari to demonstrate the lack of interest in attending rapidly to the aid of these victims of violence and terrorism. The first is of global dimension whereas the second has local dimension. Internationally, the President, Muhammadu Buhari led a delegation to the United Nations 70th General Assembly in New York in the United States of America last week  and amongst his salient objectives is to rally international efforts against Boko Haram but the Nigerian delegation stayed away from a meeting called by the United Nations Humanitarian Aid Chief Mr. Stephen O’Brien to discuss Islamic extremist group Boko Haram’s insurgency and the millions of displaced people in the Lake  Chad Area.

US and European Union Diplomats attending the UN General Assembly expressed their disappointment that Nigeria did not attend the event while other African delegations did, so reported Reuters news agency.  But the Nigerian delegation showed no remorse for this show of shame even as the media assistant to the President Mr. Garba Shehu put up an indefensible and flimsy position claiming the meeting wasn’t properly tabled by the UN as an official engagement.  But a clear fact has emerged from all of these shenanigans and that is the shameful fact that government officials in Nigeria have little regards for the welfare of victims of terrorism in Northern Nigeria. Then the second event that happened although locally was the formation of a committee to reintegrate members of Boko Haram.

There is so far no far -reaching legal strategy from the office of Federal Attorney General of Nigeria (four months after his inauguration President Buhari has not yet appointed the AGF); States Attorneys General of the Northern States that remain the flash points of terrorists attacks for the swift, decisive and professionally competent prosecution and judicial sanctions for the perpetrators of these crimes against humanity and genocides who are members of Boko Haram.

Rather, what is of importance to government is the resettlement of terrorists because only few hours back, the Federal Government inaugurated a committee to oversee the successful reintegration of Boko Haram members, who have renounced the sect into the sane Nigerian society, with the mandate to within one month identify sources of funding and technical assistance needs of the repented terrorists, even as 315 terrorists that surrendered are being interrogated.

The Committee according to a statement from the Defence Headquarters (DHQ) signed by Group Captain Wap Maigida for acting Director of Defence Information (DDI) said the creation of the committee is in accordance with Presidential directive to see to the creation of a safe space in the society for their assimilation, with membership drawn from Governors of the Northeastern states, representatives in the Ministry of Defence other agencies of government and Defence headquarters, Police and other security agencies.

“Members of the committee comprise relevant federal government agencies involved in the counterinsurgency operation and representatives of states in the North East and Jigawa”.

Recall that the adoption of new strategies and operational designs to curb the insurgency and the gradual spread of terrorism attacks in the country, coupled with the Presidential directive to end the menace before the end of 2015, has yielded results with substantial part of the terrorists stronghold overran by the Nigerian military, with thousands of the members killed and hundreds others captured or willingly surrendering to the troops, the statement affirmed.

According to the statement, there is a category of repented terrorists that would be considered for reintegration, it said the Presidential directive instructs the Committee to “oversee the creation of safe passageway into the mainstream Nigerian society for members of the Boko Haram terrorists.

“The Committee’s terms of reference include; to identify implementation partners and establish their responsibilities, to establish a framework for coordination of implementation agencies, to determine funding requirements and sources, to identify technical assistance needs and possible sources, to outline broad information strategies in collaboration with implementation agencies, to determine location of assembly areas, encampment sites, IDP Camps as well as safe corridors and routes, and, finally, to determine the overall security requirements and concerns in the counterinsurgency operation.”

Good as the above sounds but why put the issue of terrorists higher than those of the victims? What is the essence of social justice and why undermine the Nigerian Constitution just so that terrorists who ought to have their day in court are granted soft-landing in a nation that has witnessed so much bloodshed?  Scandalously, Boko Haram has continued to unleash devastating bloodsheds on the civilian populations with an unprecedented death toll.

In summary I will borrow from the Divini Redemptoris (on atheistic communism) whereby a straight forward import of social justice was given as follows: “…if social justice be satisfied, the result will be an intense activity in economic life as a whole, pursued in tranquility and order”.

The above goes to show that no matter how so well Nigeria decorates its current effort to placate terrorists, but as long as the victims of terrorism are left in the lurch and at the mercy of the vagaries of economic deprivations and the realisation that those who victimised them are the ones having the upper hands in terms of resettlement, the society will only experience  the peace of the grave yard since any injustice that remains hidden under the carpets of impunity will come right back to haunt the society in no time.

Let President Muhammadu Buhari deliver social justice to the thousands of victims of terrorism and also ensure that the criminal prosecution of terrorists locally or in the International Criminal Court in The Hague Netherlands are not jeopardised and sacrificed on the altar of political mediocrity. An injustice to one is injustice to all. It’s a moral and ethical crime and a criminal affront to the sanctity of the Nigerian constitution if the perpetrators of violence and terrorism are offered blanket pardon whereas the victims are denied justice. The nation dies the moment social justice is undermined.

Russian Scientist Claims He Knows The Secret To Eternal Life