Aretha Franklin: Tributes Flow In For Queen Of Soul

Tributes are pouring in from the worlds of entertainment and politics for Aretha Franklin, the US singer known as the Queen of Soul, who has died at 76.

Franklin performed at inauguration events for three US presidents and was a powerful advocate for the civil rights movement.

“For more than 50 years, she stirred our souls,” Bill and Hillary Clinton said in a joint statement.

Remembered for hits like Respect and I Say A Little Prayer, Franklin won 18 Grammys and had 17 Top Ten US chart hits over a musical career spanning seven decades.

She was diagnosed with cancer in 2010, and announced last year she was retiring from music.

The singer died at her home in Detroit surrounded by family and loved ones, her family said in a statement.

What did she mean to Americans?

In 2005, she was awarded the Presidential Medal of Freedom by President George W Bush, when she was saluted for “capturing the hearts of millions of Americans”.

She was “one of America’s greatest national treasures”, the Clintons said. “She was elegant, graceful, and utterly uncompromising in her artistry.”

Mr Obama said in a joint statement with his wife Michelle: “In her voice, we could feel our history, all of it and in every shade — our power and our pain, our darkness and our light, our quest for redemption and our hard-won respect.

“She helped us feel more connected to each other, more hopeful, more human. And sometimes she helped us just forget about everything else and dance.”

The current President, Donald Trump, tweeted that Franklin had been a “great woman, with a wonderful gift from God, her voice”.

The ACLU (American Civil Liberties Union) said Franklin had made sure “black women wouldn’t be ignored”.

Aretha Franklin provided the civil rights movement with a powerful voice — and financial support — and made sure Black women wouldn't be ignored.

Today we say goodbye to a lifelong champion for racial justice. pic.twitter.com/7ncCenbJRC

The singer was praised by the National Association for the Advancement of Colored People (NAACP) as an “iconic symbol of black pride whose music touched so many hearts and souls”.

Civil rights leader Al Sharpton said he was “deeply saddened by the passing of a beloved friend and queen/warrior” while fellow civil rights figure Jesse Jackson remarked, “Earth has lost a lot of music today.”

Nasa, the US space agency, noted that the asteroid bearing her name would keep on orbiting. 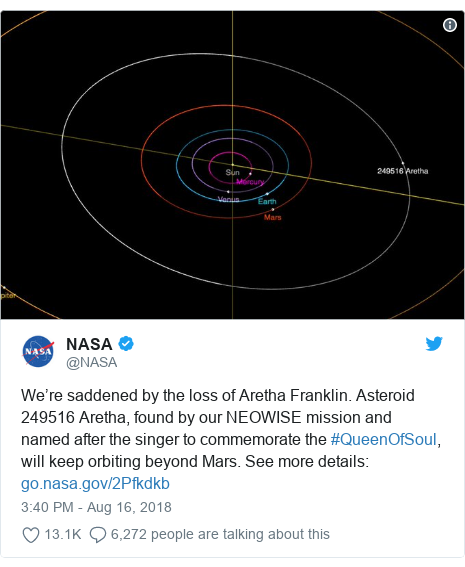 How did she die?

Her family confirmed her death had been due to advanced pancreatic cancer of the neuroendocrine type.

“In one of the darkest moments of our lives, we are not able to find the appropriate words to express the pain in our heart,” it said.

“We have lost the matriarch and rock of our family. The love she had for her children, grandchildren, nieces, nephews and cousins knew no bounds.”

Franklin gave her final performance last November at a gala in New York held in aid of the Elton John Aids Foundation.

Who was Aretha Franklin?

Born in Memphis to a gospel singer/pianist and a celebrated Baptist preacher, Franklin was tutored from an early age by such gospel stars as Mahalia Jackson and Clara Ward.

She struggled to find fame in the early years – the Columbia record label was unsure how to frame her powerful voice.

After moving to Atlantic Records in 1966, she made her breakthrough, releasing some of her most iconic songs like Respect.

By 1968 she was renowned throughout America and Europe as “Lady Soul” – a symbol of black pride who appeared on the cover of Time and was given an award by Martin Luther King.

What is the music world saying?

Sir Elton John said he had “adored and worshipped” her: “The loss of Aretha Franklin is a blow for everybody who loves real music.”

Former Beatle Sir Paul McCartney wrote: “Let’s all take a moment to give thanks for the beautiful life of Aretha Franklin, the Queen of our souls, who inspired us all for many many years.”

A number of other stars including John Legend, Britney Spears and Tony Bennett shared their memories.

You only have to compare Otis Redding’s original recording of Respect to Aretha’s version to hear it. His is superb. Hers is otherworldly.

Even her most thunderous performances retained their humanity – something her shoutier disciples often overlooked.

The desolate colours she painted onto the verses of Carole King’s (You Make Me Feel Like A) Natural Woman made the release of the chorus even more joyous.

Even in later years her performances still had the poetry and power to move audiences – including, notably, Barack Obama – to tears.