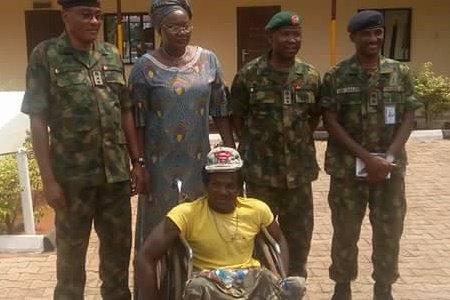 Mr. Chijioke Uraku was battered for allegedly wearing a camouflage shirt in Onitsha.

Elombah.com has, on Thursday, February 9, reported that the Nigerian army arrested the two soldiers caught on video maltreating a physically challenged person.

“We wish to inform the public that the incident took place on Tuesday 7th February 2017, at Onitsha, Anambra State.

“In line with our zero tolerance for acts of indiscipline and unprofessional conducts especially in relation to violation of human rights, we wish to further state that the soldiers involved have since been identified and apprehended.

“They have also been charged for assault by their Commanding Officer,” the army spokesman added.

However, not done with mere arrest and prosecution, the army, at 302 Artillery Regiment/14 Field Engineer Regiment, Onitsha, choose to compensate the victim.

Cash and gift item were presented to the victim.

Abuchi onwumelu of fides newspaper, who covers the event, reports that

Meanwhile, the soldiers who carried out the dastardly act have been arrested and subjected to severe punishment.