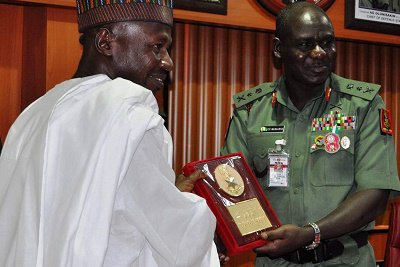 The Nigerian Army on Friday, December 2, 2016, pledged to support the Economic and Financial Crimes Commission [EFCC] in the fight against corruption.

The pledge was undertaken when Acting chairman of EFCC, Ibrahim Magu visited the Army authorities where he met with the Chief of Army Staff [COAS], Lt. Gen. Tukur Buratai.

Magu’s visit was to seek for partnership in the fight against economic and financial crimes with then army.

During the visit, the EFC chairman also used the opportunity of the visit to inform the military of the forth coming Women Against Corruption (WAC) project.

The project will be flagged off by the wife of the President, Aisha Buhari at the International Conference Centre on December 7, 2016.

The COAS, in his reply promised to leave no stone unturned in the effort to sanitize the country in general and the military in particular of all forms of impunity, economic and financial crimes.

He also promised to mobilise all women in uniform for the December 7 event.

In another development, the Army has said that no fewer than 6,022 of its personnel would be captured in a biometric enrolment exercise for the 75 regular recruits’ intake.

Inaugurating the personnel in Zaria, Kaduna State, the Chief of Army Staff, Lt.-Gen. Tukur Buratai, said he was aware of the efforts made on the computerization of the functions of the Nigerian Army Finance Corps.

He said that the exercise was in line with the ongoing financial reforms of the Federal Government.

“The Nigerian Army as a vital arm of government, will surely leave no stone un-turned in ensuring the full implementation of all programmes and policies of the of the Federal Government.

“I strongly believe that the objectives of these programmes is to improve service delivery in the Nigerian Army and the government in general, and to have a professionally responsive Nigerian Army in the discharge of its constitutional roles.

“The need to maintain a robust personnel database is therefore imperative, especially considering our involvement in various security operations in our dear country and overseas,’’ he said.

Earlier, the Acting Chief of Accounts and Budget of the Army, Brig.-Gen. Jehadi Jakko, said the enrollment exercise was aimed at ensuring that only duly certified trained recruits are documented and enrolled into the Nigerian Army database.

Jakko represented by Brig.-Gen. John Ozigi said that it was in compliance with the government directives on the adoption of E-book payment system by all MDAs.

He said that to meet the target, the corps has maintain a robust biometric database for all Army personnel

Jakko stressed that the database would “create an environment for the prudent and transparent application of financial resources toward a professionally responsive Nigerian Army.”

He said it would also help in “planning, budgeting and management and more efficient and timely utilization of resources,” he said.