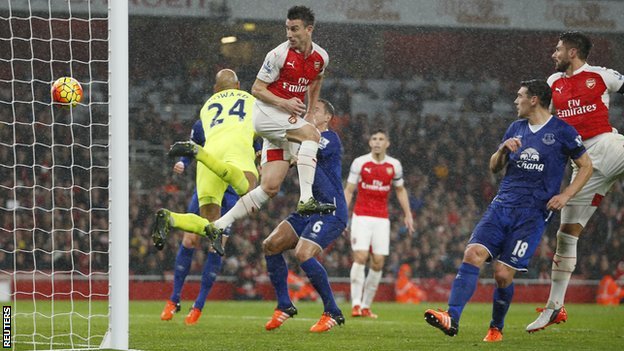 Arsenal went top of the Premier League for the first time since February 2014 as headers from Olivier Giroud and Laurent Koscielny defeated Everton.

After a cagey opening, the Gunners went ahead as Giroud met Mesut Ozil’s floated cross with a deft touch.

Ross Barkley’s deflected shot brought Everton back into it, but Romelu Lukaku wasted an excellent, if rare, chance to level as he headed against the bar.

Arsenal goalkeeper Petr Cech denied Gerard Deulofeu late on, but the hosts also had their chances to make the scoreline more comfortable.

Everton’s miserable evening was compounded by Gareth Barry’s injury-time dismissal as he picked up a second yellow card for a foul on Kieran Gibbs.

Chelsea manager Jose Mourinho refused to speak to the media after he was sent to the stands during his side’s 2-1 defeat by West Ham.

The derby defeat was Chelsea’s fifth in their opening 10 league matches this season, and came after Mourinho, assistant first team coach Silvino Louro and midfielder Nemanja Matic were all sent off.

Mauro Zarate fired the Hammers in front when Chelsea failed to clear a corner.

Matic was sent off after being booked twice in nine minutes before the break, and Mourinho joined him after speaking to referee Jon Moss at half-time.

Gary Cahill levelled from a corner but Carroll met Aaron Cresswell’s cross to send the Hammers third in the table.

Chelsea, who have now lost five of their first 10 Premier League games this season, continue to languish in the bottom half.

As well as Matic and Mourinho, the Blues’ assistant first-team coach Silvino Louro was also dismissed.

Chelsea had five other players booked in a stormy east versus west London derby, the last to be played at Upton Park in the league before West Ham move to the Olympic Stadium next summer.

As It Stands Table

Arrest of Nnamdi Kanu and Nigeria as a repressive colonial state