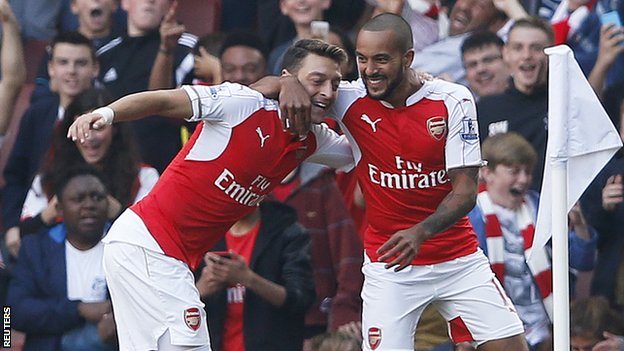 Arsenal stunned Manchester United with three goals in the opening 20 minutes as the Gunners moved up to second in the Premier League table, lifting a massive pressure off team manager, Arsene Wenger.

United had no answer to Arsenal’s opening burst as Alexis Sanchez and Mesut Ozil scored twice in 74 seconds.

Sanchez added a third from 18 yards as the Gunners beat United for just the second time in 14 league meetings.

United improved after the break but Arsenal substitute Alex Oxlade-Chamberlain hit the crossbar late on.

Arsenal’s Champions League defeat at home to Olympiakos in midweek left them in danger of failing to reach the last 16 and manager Arsene Wenger in the face of heavy criticism.

Wenger was forced to defend his selection of goalkeeper David Ospina, describing recent criticism as “not analysis of football”. He also called the press “boring”.

But his side were anything but in an opening half which saw them tear Manchester United apart, almost at will.

With their first real attack Sanchez back-heeled in at the near post after good work from Aaron Ramsey and Ozil, and the Germany playmaker then added the second a minute later after Walcott ran at a struggling defence.

Sanchez shrugged Matteo Darmian aside to add his second with a brilliant 18-yard strike which brought up an unwanted record for the visitors, as they conceded three goals in the opening 20 minutes of a Premier League game for the first time.

And it should have been four just after the half-hour mark as Ramsey volleyed wide from close range when completely unmarked.

With the game won, Arsenal failed to repeat their attacking display in the second half until substitute Oxlade-Chamberlain chipped David de Gea and hit the crossbar in injury time.

The Gunners are now just two points behind leaders Manchester City going into a two-week international break which had the potential to be uncomfortable for their fans and for Wenger.

Louis van Gaal may have spent over £250m since taking charge at Old Trafford, but he still appears to have glaring holes in his squad.

The decision to play winger Ashley Young at left-back, and the continuing selection of Daley Blind at centre-back, were both exposed by Arsenal’s electric start.

Blind played most of his first season at United in a deep midfield role and a lack of pace and strength were both in evidence against Walcott and Sanchez.

Arsenal were utterly dominant during the opening 15 minutes.

Even Chris Smalling – who has been lauded for his early season form – was too slow to close down Sanchez as he bent in the third goal after easily outwitting Darmian.

In front of United’s ragged back four, partnering Michael Carrick and Bastian Schweinsteiger in midfield also proved an error.

Carrick, 34, and Schweinsteiger, 31, are both masters at keeping possession but in an opening 15 minutes in which Arsenal totally dominated the ball, their lack of pace against the counter-attack was exposed all too easily.

Morgan Schneiderlin – left on the bench – may have been a better option to break up play as Arsenal’s Ramsey, Santi Cazorla and Francis Coquelin bossed the midfield.

The anonymous Memphis Depay and Darmian were hauled off at the break as Marouane Fellaini belatedly stiffened the centre and Wayne Rooney was moved out to the left wing.

The changes worked – as United had 72.5% of second-half possession – but they came far too late to affect the result.

The recalled Petr Cech – who made a good save to deny Anthony Martial just before half-time – saved well from Schweinsteiger late on, but United rarely threatened.

What a weekend for City

Manchester City started the weekend a point behind leaders United, and level on goal difference.

But Arsenal’s opening burst, coupled with City’s 6-1 thrashing of Newcastle, saw the men in blue open up a two-point lead at the top of the table, eight goals better off than United.

In is reaction, Arsenal manager Arsene Wenger said: “We did not give them any chances to score and that was vital. We surprised them with our start. From Petr Cech to Theo Walcott we only had superb performances. I have managed many strong teams and never had one that played 60 games at the same level. You have to accept that we are human beings.

On his part, Manchester United boss Louis van Gaal said: “It was a very bad start, without aggression and the will to win. That is the first time I have seen that from my team. I did not expect that. We have won our last four matches – I gave the players a day off because they were tired. On Saturday the training was normal, I was very amazed to see that. All teams will have a dip.”

Both Arsenal and Man U have a fortnight off thanks to the upcoming international break. Arsenal resume their Premier League campaign at Watford on 17 October, while United face Everton at Goodison Park on the same date.