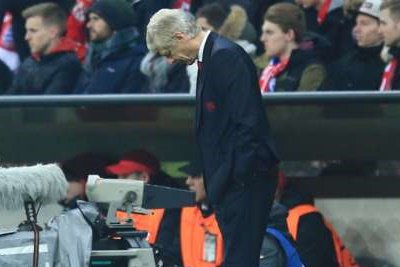 Arsene Wenger’s future as Arsenal manager will be decided at the end of the season, the BBC reported on Thursday without citing sources.

There was currently no prospect of Wenger leaving before the summer, it said, hours after Arsenal were thrashed 5-1 away to Bayern Munich in the Champions League.

Wenger, 67, is out of contract at the end of the season and has yet to accept fresh terms on offer. The decision on his future was expected to be taken mutually by the manager and the club, the report added.

A humiliating 5-1 defeat against Bayern Munich has led to a renewed clamour for certainty on Wenger’s future but Arsenal will make no instant decisions and point out there is still more than a third of the Premier League season to go.

Arsenal are currently fourth, 10 points behind Chelsea but still also in the fifth round of the FA Cup, the Telegraph reported.

The club’s owner Stan Kroenke has always been absolute in support for Wenger, who took charge of the club in 1996 and, while there were clear signs earlier in the season that the club wanted Wenger to extend, talks have been put on hold.

Arsenal have been planning for Wenger’s possible departure for some time but no direct approaches have been made to any other manager and it was always hoped that Wenger would continue.

Wenger, however, has been cautious about engaging in any talks about his future and is sensitive to the mood among fans who increasingly now want change.

Asked earlier this month what would inform his decision, Wenger said: “It is not all quantifiable. It is linked with your gut feeling as well. I focus on what I can influence.”

Those close to Wenger, however, do sense that he is approaching the end.

Martin Keown, who was part of Wenger’s great ‘Invincible’ team of 2003-4, has remained staunchly loyal to his old manager since retiring as a player, but turned critical after this latest loss.

“It was embarrassing,” said Keown. “This is his lowest point. He looked particularly wounded.

“I feel for him; he almost needs to be protected from himself. This is 20 years of work here.

“He’s been magnificent for the club. This brings forward the change that looks likely at the end of the season.

“I think it will be him that makes the decision. The realisation that the decision needs to be made is more apparent tonight.”