As Nigeria Bleeds At 57, Buhari Must Return To Int’l Best Practices —Intersociety 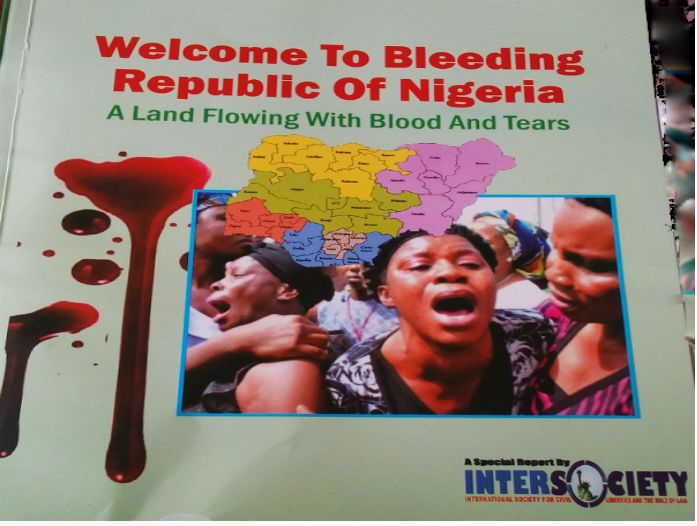 As Nigeria Bleeds At 57: Buhari Government Must Return To International Best Practices Of Governance And Stop Breeding Local And Int’l Enmities — Intersociety

The present Federal Government of Nigeria headed by Retired Major Gen Muhammadu Buhari and Prof Yemi Osinbajo is steadily losing its slim chance of putting the Federation of Nigeria and its 175million People back on track in matters of civil and constitutional governance.

The Administration’s hard and atrocious stance on collective issues of governance has gravely put the country at crossroads and dangers of alarming proportions at local, regional and international scenes.

At 57, Nigeria and Peoples of the country comprising 383 tribes, 400 languages and multi religions are more divided, segregated, polarized, balkanized, frightened, terrorized, impoverished, starved and under-developed especially in the past two years of the Buhari/Osinbajo Administration.

The level of State and non-State actor violence, militarization and terrorization of political space and the citizenry; and shrinking of citizens’ constitutional liberties is not only second to none in democratic Nigeria, but also capable of exploding  and enveloping the entire country with hybrid civil violence of widespread and intractable magnitudes.

It is also correct to say that the Administration is dangerously taking Nigeria and its 175million to the Somali way (i.e. failed and intractably fragmented state).

It is now a truism that the greatest threats to Nigeria’s Unity and Oneness are not ordinary Nigerians including the People of Igbo Race, but President Muhammadu Buhari, Vice President Yemi Osinbajo, the present Service Chiefs, the Police IGP and other key cabinet members of the present Federal Executive Council, including Alhaji Lai Mohammed, who appears to be one of the greatest tragedies that have befallen the Administration since its inception on 29th May 2015.

Apart from earning notoriety in propaganda and official falsehood, the said Information Minister has further let loose, to the extent of engaging in international blackmailing and stampeding of key members of the international community including Permanent Security Members of the United Nations Security Council; namely: EU, US, UK, France and Russia; by dictating to them how to operate within international best practices and laws and conduct their diplomatic activities.

It is now a case of an antelope tormenting a lion in its den or territory. Stampeding and blackmailing international community into labeling or tagging innocent members of the Igbo Race per IPOB as a terror race is a height of diplomatic hara-kiri or suicide and crossing of international redlines.

We make bold to say that there is no difference between the position of the international community including the Commonwealth of Nations in 1995 when the Abacha military’s inglorious epoch resorted to judicial infamy and murder, resulting in the hanging of “Ogoni Nine” (inclusive of Ken Saro Wiwa) and the recent vindictive, wicked, hasty, hurried, militarist and unconstitutional proscription by the present Buhari/Osinbajo Administration of the Igbo Race per IPOB as “a terror race/organization”.

The referenced act constitutes both psychological and physical war declaration against an unarmed, defenseless and peaceful race or population using all kinds of government arsenal including militarized judiciary and force of arms.

The act also brazenly wears the outlook of retroactive pronouncements and punishments; which are gravely unconstitutional and below the international best practices, leading to present grounded stance of the international community including key members of the world super powers (EU, US, UK and France).

Blackmailing and stampeding the international community and world super powers to join the lopsided composed Federal Government of Nigeria in its latest conduct deformities is official propaganda, falsehood and provocation taken too far.

To the extent of assembling and paying again the same people that were hired and paid barely two months ago to besiege the Amnesty Int’l office in Abuja and US Embassy in Lagos in phantom anti-AI and US protests; to hold to ransom and ground the business activities of US Embassy in Nigeria in the name of another anti “US pro IPOB terror activities”’ protests; is a height of diplomatic and international provocation.

If the present militocracy of the Buhari Administration is pushing it to stampede, blackmail and provoke the west including USA, then Nigeria and its 175million People are in danger or endangered.

The recent purchase or moves to purchase 12 Super Tucano jet fighters valued at $593million or purchase of  MiG 35 fighters, Yak-130 aircrafts, artillery equipment and armoured vehicles from Russia, or donation by the Hashermite Kingdom of Jordan of 200 rickety and smoky armoured tanks and war helicopters or reception of Four Super Mushshak Jet Fighters from Pakistan, etc., must not give the Buhari/Osinbajo Administration impression that it has arrived militarily, to the extent of now blackmailing, verbally attacking and provoking key members of the international community especially US, UK and France.

The present Federal Government of Nigeria must tread softly and cautiously internally, regionally and internationally. Republics of Iraq and Libya were once noted as antagonistic countries with sophisticated military hardware and software.

Before the 1991 Gulf War, for instance, Iraq used to have over 320 sophisticated war planes with other hi-tech military arsenals, mostly assembled in its undergrounds.

At the height of similar international provocation, its run-away terminals of its military airports were targeted and destroyed by more advanced US warplanes and all the Iraq war jets were grounded in a twinkle of an eye and reduced to rubbles.

Today, it is 57 years of sorrowful and anguish nationhood with all indices weighing brutally negative against Nigeria and designating it as polarized and failed state.

Nigeria under Buhari/Osinbajo Administration cannot be measured or factored into any of the Seven Dimensions of Human Security; intellectualized and conceptualized by the UNDP in 1992 and packaged for public governance in developing countries such as Nigeria.

Rather, Nigeria, especially under the present central Government has decayed and dangerously relapsed to the status of the least developing country and highly indebted poor country (HIPC) status.  That is to say that Nigeria at 57 under Buhari/Osinbajo Administration is a colossal failure.

None of the seven dimensions of human security: territorial security, personal security, food security, health security, community security, economic security and environmental security is tangibly and intangibly put in place in Nigeria in the past two years.

The country and its central Government as presently constituted virtually rely on huge internal and external borrowings to sustain its over-bloated and alarming cost of governance.

Its capital budget is barely 30% of the annual federal budget; yet it is still characterized by half-baked implementation and project execution that is cloaked in white-elephantism.

Statistically, the Buhari/Osinbajo Administration has in two years borrowed 40% of Nigeria’s total domestic and foreign debts.

In June 2007, according to Nigeria’s Debts Management Office (DMO), Obasanjo Administration left a total of $16.5billion as local and foreign debts; comprising N1.8t or $13b local debts and $3.5b foreign debts(using then official exchange rate of N140 per $USD).

In the past two years, or from 30th June 2015 to 30th June 2017, a period of two years or since the inception of the present central Government of Buhari/Osinbajo, Nigeria’s total local and foreign debts had risen to N19.16t or $65b (using present official rate of N305 per $USD); sowing that over N7t or $25b has been borrowed.

These did not include the $30b foreign loans being sourced by the Administration from various lending institutions around the world.

By the end of June 2019, Nigeria’s total official debts stocks must have risen to N28.5t or over $95billion especially when the $30b foreign loans under borrowing must have been fully followed and captured by the DMO and the NBS.

In all these borrowings, the critical social sectors including key infrastructure development, maintenance and management as well as provision and delivery of social services are still left in a worse and worrisome state.

Apart from brazen militarization of political space and State terrorization of citizens of Nigeria and flooding of the country’s armories with State and non-State actor procured Small Arms and aerial weaponry; most of them rickety, smoky and outmoded; the country’s federal road network is in acute sorry state.

Energy crisis has risen to an apogee, direct foreign investment has dropped and shrunk sharply, education and health institutions are in shambles, local industries and industrial growth are at their lowest ebb, institutional corruption has not only quadrupled, but also become scientific, and youth militancy and restiveness occasioned by acute unemployment have soared intractably.

We make bold to say that Nigeria at 57 is nothing but celebration of hopelessness and double digit negativities in all indices of Human Security and its Seven Dimensions.

The Buhari/Osinbajo Administration is therefore called upon to rewind and reverse before the slim chance slips off its hands. Nigeria and its 175million People must be returned to the international best practices of governance, rule of law, constitutionalism and internationalism.

The  reversal being demanded from the Buhari/Osinbajo Administration must include: immediate de-proscription of the Igbo Race per IPOB as a terror race and accompanying open government apology to Igbo Race, mass sacking of all members of the Service Chiefs and the IGP of Police; immediate dissolution of the Federal Executive Council including sacking of Alhaji Lai Mohammed as Minister of  Information; de-blackmailing and de-stampeding of international community including EU, US, France, UK, etc. and accompanying government open apology to them.

Others are: de-militarization and de-radicalization of Nigerian military and the democratic space, de-terrorization of 175 million People of Nigeria, reconstitution and re-composition of the Federal Government of Nigeria and its FEC and Service Chiefs in line with Section 14 (3) of the Constitution or geopolitical spread; withdrawal of soldiers and other members of the Armed Forces from the arenas of all parts of the country, except the Northeast States of Borno, Adamawa and Taraba;  release and de-criminalization of all innocent members of the Igbo Race and their South-south counterparts wickedly tagged “ IPOB terrorists” and comprehensive criminal investigation of all cases of gross abuses of human rights in Nigeria including Shiite and IPOB massacres, etc.

For: Int’l Society for Civil Liberties & the Rule of Law (Intersociety)

Now That Obiano Has Liquidated Anambra ~By Val Obienyem