At least 64 people have died in the raging forest fire in Portugal which has been claiming its victims since Saturday.

Portuguese Police authorities believe the fires were started by lightning on Saturday during an intense heat wave and rainless thunderstorms.

The latest victim, reports BBC, was identified as a 40-year-old firefighter who died in hospital.

Many other victims reportedly died inside their cars or a short distance away from them as they tried to flee. More than 130 other people have been injured.

Some officials said that soaring temperatures are threatening efforts to bring the raging fire under control.

The week’s highest temperatures of around 38C (100F) are expected on Tuesday and together with windy conditions could reignite fires already quelled.

Civil protection officials, however, say although 70% of the fire is under control, what remains is a source “of great concern”. 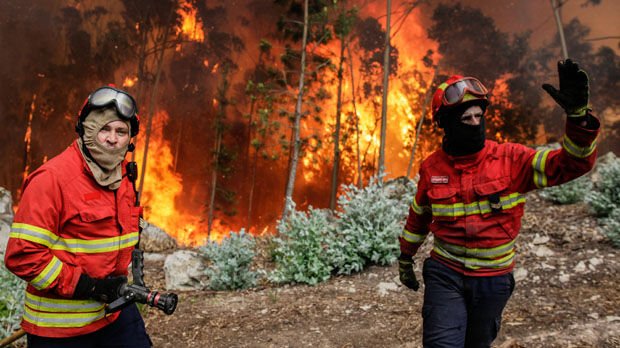 Firefighters overwhelmed by the fire

Meanwhile, the government has declared a state of emergency in the forested region around Pedrógão Grande, north-east of the capital, Lisbon.

One of the worst-hit areas was around the village of Nodeirinho. Thirty bodies were found inside cars and another 17 next to vehicles on the N-236 road.

A few miles north, 11 people died in the village of Pobrais, many as they tried to escape the flames.

Virgilio Godinho, who lives in the village of Figueiro, said the fire quickly overwhelmed the community.

“The fire didn’t spread by the ground, it spread through the air at the height of the trees. In five minutes all were on fire in an area of around 10km,” he said.

Portugal is observing three days of mourning for the victims.