Violence in the Delta has cut oil output by a third. It may get even worse

IN THE Niger Delta, a gun is an investment that yields excellent returns. Jamnogo Blessing, a gang member, recently turned up in Yenagoa, a turbulent city in the oil-pumping Niger Delta, to buy a stash of weapons from militants who hung up their boots seven years ago. “The only language the government listens to is violence,” he says. Once rearmed, his gang will attack oil companies operating around his home town of Idheze, he adds. 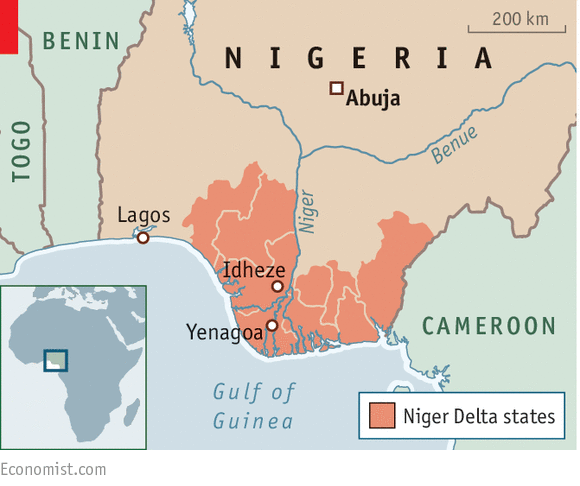 An army of unemployed young men like Mr Blessing is threatening to rise up in southern Nigeria and blow up oil pipelines. The industry, on which Nigeria depends for nearly all government revenues, could be crippled, as it was for much of the early 2000s. Production has already fallen to about 1.5m barrels a day (b/d), down from 2.2m last year, as attacks gather pace. This has helped push the global oil price back up to almost $50 a barrel. And it could spell disaster for President Muhammadu Buhari, who is trying to stave off recession. His budget assumed almost double that level of output this year.

Responsibility for much of the damage has been claimed by a mysterious and skilful band called the Niger Delta Avengers. Earlier this year they set off an explosion six metres under water, cutting output by 250,000b/d. Foreign oil firms are giving up on repairs, since the saboteurs just strike again. Local producers who rely on pipelines have been forced to turn off the taps. “We’ve had not a drop of oil for four and a half months,” laments Kola Karim, the boss of Shoreline Energy, one such group.

The Avengers say they want more local control of resources. This is what gunmen in the Niger Delta always say. And by “local”, they mean they’d like a taste of the money themselves. “It’s just old wine in a new jar,” says Jonjon Oyeinfe, an activist. The last set of militants more or less stopped fighting after they were bought off with an amnesty in 2009, and a monthly stipend of 60,000 naira each (about $400 at the time). That is a huge sum in a region where most people live on less than a dollar a day, and gives other men a reason to take up arms.

Many Niger Deltans sympathise with the rebels. Until last year a local man, Goodluck Jonathan, was president of Nigeria and showered goodies on his home region. Mr Buhari, who hails from the north, has cancelled a number of pipeline security contracts that had been given to southerners, including Mr Tompolo, and slashed the budget for paying off ex-fighters by 70%. Unemployed former rebels moan that it has been four months since they got their last monthly stipend. They are also furious that a proposed oil-law amendment would scrap the royalty that went to local communities. “Right now everybody in the Niger Delta is an Avenger, because everyone is angry,” says one former fighter, sitting by a swimming pool. Other rebel groups with comic-book titles such as the Niger Delta Suicide Squad seem to pop up almost every day.

Some of their complaints are fair. Nigeria’s oil business is a labyrinth of patronage and corruption, where politicians skim off profits and cartels steal hundreds of millions of barrels every year. Oil pollution kills fish and impoverishes fishermen. Yet there is no reason to think that it would be better managed if control were devolved to the Delta. For years a hefty 13% of oil revenue has been pumped back into the producing states, but governors have generally squandered it. Another war would only make matters worse. “This will not stop until they do things right,” says the retired militant. “The time will come when Nigeria is producing no oil at all.”

From the print edition: Middle East and Africa

Buhari is the kind of leader Nigeria needs this time – Osinbajo