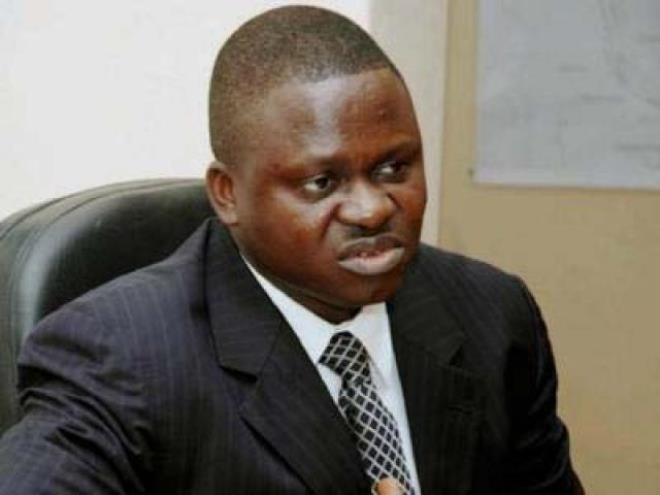 The PDP said Alaibe is interested in dredging because “he owns the biggest dredging machines in Nigeria.”

Alaibe had in a recent electronic media advertisement stated that he would favour dredging as a major means of economic development and empowerment if he wins.

But the Bayelsa State Secretary of the Bayelsa PDP, Keku Godspower, in a statement in Yenagoa, said such proposal was bereft of “clear thinking” on the challenge of empowerment and development in the state.

The party wondered what significant economic value and benefit dredging would bring to the people of the state as proposed by Alaibe.

Keku said, “Frankly speaking, the PDP is surprised by Alaibe’s thought process on issues of governance and development. By making dredging a core policy thrust of his administration, if elected, obviously exposes his shallowness.

“It shows that the man lacks strategic thinking and bereft of clear cut ideas on how to advance the course of governance and development of the state. In a 21st century where deep knowledge and big ideas are shaping public policies and development issues, Alaibe is talking about dredging. It’s ridiculous.”

Keku berated the governorship aspirant for entering into the race, adding that given the shallowness of his ideas, he has “nothing fantastic” to offer the people of the state.

He further stated that it was for Alaibe’s poor policy understanding that he could not make much impact in his years at the Niger Delta Development Commission (NDDC) both as Director, Finance and Administration, and later as the managing director.

“Clearly, Alaibe lacks content and he is not properly grounded on issues of governance and development. Little wonder he could not deliver on his mandate while in charge of a critical interventionist agency like NNDC with a budget that is five times more than the budget of all the 9 states that make up the Niger Delta”, he stressed.

Keku, however, offered reason for Alaibe’s thinking, stating that he owns the biggest dredging machines in Nigeria and as such he would be awarding contracts to his companies if elected.

“PDP looks forward to having a rigorous and robust debate with the likes of Alaibe so that we can give Bayelsans the opportunity to make their choice on who has a better grasp of the issues that are dear to their hearts”, he stated.