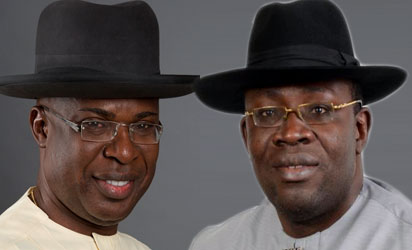 The Peoples Democratic Party (PDP) in Bayelsa State on Thursday dismissed the ambition of a former governor of the State and governorship candidate of the All Progressive Congress (APC) for the December 5 election, Timipre Sylva [image above with incumbent Gov Dickson], describing him as unelectable.

The State Secretary of PDP, Keku Godspower, who made this assertion in a statement in Yenagoa, said it was a shame and insult to the collective sensibilities of Bayelsans that of all their members, Sylva was the best they could put forward as candidate.

Keku, who frowned at the choice of Sylva, said what the party’s decision meant was that the APC was not prepared for any serious outing at the election because as he noted “everybody in Bayelsa knows that Sylva is not electable”.

He, however, hinted that since Sylva’s emergence, there are palpable fear, tension and apprehensions among Bayelsans which he attributed to the spate of violent incidents during the recent APC governorship primaries in the state.

Keku also alleged that Sylva has a record of violence and that his second coming will not be different.

According to him, since the primaries, the state had witnessed the influx of cultists and militants which he also claimed had created palpable fears and tension among the people.

He added that this development, if not checked, could lead to relapse of violence in the state and the entire Niger Delta region.

Keku, however, was confident that possible violence would be contained, assuring the people that security agencies in the state will deal with anyone caught breaching the peace or molesting anyone.

The PDP advised Bayelsans to go about their lawful businesses without fear of intimidation, urging them to report any suspicious character to the security agencies.

While asking the people to vote for the PDP during the December election, Keku also called on the Federal Government to direct its security agencies to take urgent steps to ensure the security of lives and property in the state.

“With the December 5 governorship election around the corner, we duly call on the people to outrightly reject Sylva’s candidacy and his APC-led politics of violence and intimidation which has become a well- known trademark”, he stated.

Nigeria at 55: The Path towards Development