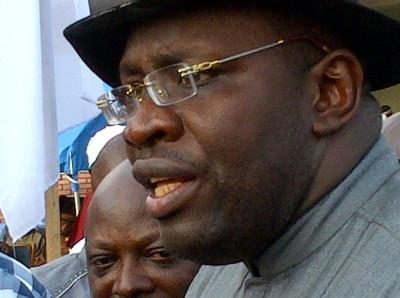 Bayelsa State Governor, Henry Seriake Dickson, has said that those who defected from the state chapter of the Peoples Democratic Party (PDP) three days ago were greedy and selfish politicians.

Dickson who spoke in Abuja on the sidelines of the National Security Summit 2015 organized by the Nigeria Police Force in conjunction with The Sun Publishing Limited, publishers of The Sun titles, said the defectors did so only for greed and selfish reasons.

A former Special Adviser to the President on Niger Delta Affairs, Mr. Timi Alaibe, embattled chairman of the party in the state, Col. Sam Inokoba (retd), Senator Heineken Lokpobiri and others, defected to the All Progressives Congress (APC) on Saturday.

The defectors, according to media reports, were received by the National Chairman of the APC, Chief John Odigie-Oyegun.

But Dickson while stating that it was their right to decamp, said for the records, it was important that the public know why they decamped to the APC.

He said, “They decamped because each one of them wants to be governor and the PDP platform is not available. So, they are going to the next alternative and which in the case of the APC, is the party that has control of the center and by so doing, positioning themselves for federal appointments, which the PDP and I are not in a position to give to them.

“And they are hoping somehow that federal might, by way of security and the Independent National Electoral Commission (INEC) manipulation, will see their eventual flagbearer into the government house, which is not going to be the case.”

The governor who said he is firmly on ground in the state, added that his people are of the view that his administration has done well and on the election day, will troop out en mass to vote for him and the PDP.

Dickson added: “We know the antecedents of each and every one of them and we are confident that the people are not with them.”

Asked if he would describe them as greedy and selfish politicians, Dickson said: “that is what people say it is. Our people know what is going on and at the right time, they would put all of them to shame. Just watch out,” Dickson declared.

On if he was sure of getting re-elected for a second term in office; the former federal lawmaker said he was prayerfully sure.

According to Dickson, “I am sure. That is a PDP state and I have done well. It is not me saying it; it is the people of Bayelsa that are saying it. And they know them. So, let’s wait to see who their flagbearer would be against me,” Dickson concluded.

Oshiomhole’s fresh forensic audit of NNPC: A point of order