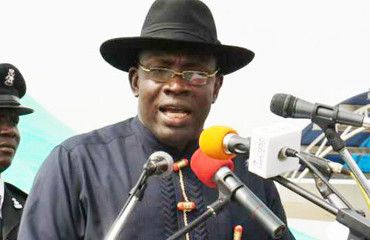 The 19 communities that made up Brass constituency 3 area of Bayelsa state on Friday came out in their thousands to endorse the re-election of Governor Henry Seriake Dickson.

In what appeared like a carnival laced with politics, people trooped out enmasse to give the visiting governor a rousing welcome.

The affected communities said they were highly impressed with the performance Governor Dickson, especially in the areas of Security, Education, Health and Infrastructure.

At two separate rallies at Sangana and Ogbokiri in Akassa clan, the governor’s visit was described as historic as the traditional head of the kingdom, the chiefs and people said they are resolute in their resolve to vote massively for the PDP-led government come December 5th 2015.

In his address, the PDP chairman of ward 10, and a serving commissioner in the State Local Government Service Commission, Hon. Uroh Kiani highlighted some of the social amenities provided in the area by the restoration administration to include model secondary school, rehabilitation of health centre equipped with modern facilities including water ambulance.

He lauded the Governor for giving them a sense of belonging by appointing sons and daughters of the area into position of responsibilities including the Commissioner for Health, Dr. Ayibatonye Owei and facilitating the election of Senator Ben Murray Bruce.

He stressed that it was the first time a sitting governor is visiting Akassa kingdom since the creation of the state.

At Ogbokiri, the Chairmen of ward 7, 8 and 9 said their loyalty lie with the PDP that gives the Ijaws the platform to be vocal and showcase their will to stand for peace and justice.

Responding, Governor Dickson thanked the people for the warm reception accorded him and his entourage which he described as a carnival.

Reacting to their request of concrete walkways, shoreline protection, potable water, upgrading of chieftaincy stool in the kingdom among others, Governor Dickson assured them the government will tackle them within the limit of available resources.

Governor Dickson who visited Liama and Egweama communities had earlier paid a courtesy visit to the traditional ruler of the Akassa kingdom.