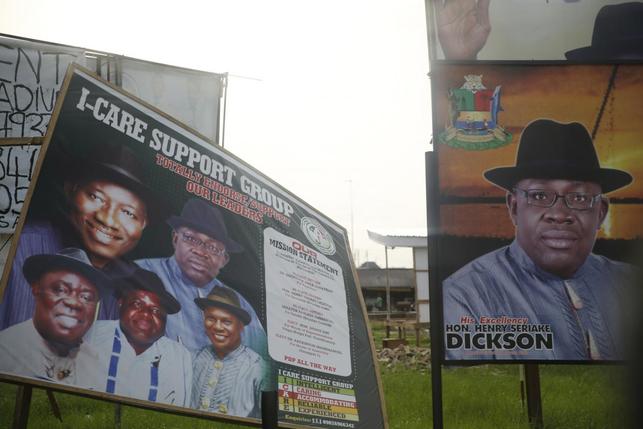 The Restoration Campaign Organisation (RCO), an organ of the Peoples Democratic Party in Bayelsa state has raised the alarm over alleged destruction of its campaign billboards and pole fliers across the state by suspected members of the All Progressive Congress (APC).

This is coming with about one month to the December 5 governorship election.

The RCO therefore called for timely intervention of the security agencies.

During the week, suspected members of the APC attacked the convoy of Bayelsa state governor, Henry Seriake Dickson while on his community to community campaign tour in Swali, Yenagoa LGA of the state.

The RCO in a statement by its Director of Publicity, Jonathan Obuebite and made available to newsmen on Friday in Yenagoa said the call became imperative so as to avoid political clash in the state.

According to him, most of the billboards erected by the ruling party in the state have been defaced while many were out rightly damaged by people identified as APC faithful

“Over 70 percent of our billboards in some communities in the state, to be precise, Kpansia, Agudama, Ovom and Igbogene have been defaced by the suspected members of the APC.

“This development lend credence to our position that APC is not ready for the contest, rather its members are looking for means to provoke us, so that there will be crisis in the state”, Obuebite stated.

The RCO said, “We are law abiding people and we abhor violence in all forms, it is therefore disheartening that all our billboards are being defaced and destroyed without cause.

“We appeal to the Nigerian Police Force and other law enforcement agencies to come to our aid and protect us from this assault. We want to carry on our activities in a peaceful manner to maintain the peace that has been prevalent in this State.”

The RCO concluded that the PDP is for peace and will not in any way jeopardize the peaceful coexistence in Bayelsa state.

Buhari must demonstrate boldness in his ministerial appointments