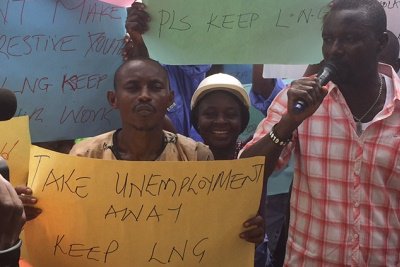 Angry Youths and Women of Brass Communities in Brass Local Government Council Area of Bayelsa State on Tuesday staged a protest March against the planned withdrawal of the Federal Government 40 per cent stake ‎and relocation of the Liquefied Natural Gas project in the area.

The Protesting women, armed with placards and green leaves, accused the Federal Government of deliberately trying to throw the area into another era of violent crimes and militancy ‎with the planned exit of the LNG from the area.

While some of the protesters claimed the workforce of the Brass LNG are being disengaged ‎due to the planned relocation and were becoming violently agitated, others were prevailed upon by the arrival of the Council Chairman, Hon. Bello Bina who calmed them down and promised to pass their complaints to the State Governor, Hon. Seriake Dickson for onward transmission to President Muhammadu Buhari.

They warned that the closure of the Brass LNG may lead the youths back to unemployment, violent crimes along the waterways and bombing of oil facilities.

“The Brass LNG might leave any moment. They have sacked their workers due to the plan.

“It is now the Federal Government want to use joblessness to provoke the Niger Delta people.

“If the LNG pull out, the youths of the state and the region may increase the tempo of criminality.”

“We are begging the FG to avoid crime and bloodshed. We also warn that we will not allow the Brass LNG leave the area with their vital equipment.”‎

Other protesters, Moses Benjamin, Caroline Isah Momo and Gbalineki Iduah, called on the State Governor, Hon. Seriake Dickson to intervene and prevail on the President, Muhammadu Buhari to stop the planned relocation of the Brass LNG‎.

They said the waterway is not safe and the Governor made the waterway safe. If the LNG go, the people will be provoke and other oil interest of the Federal Government may come under threat.”

He said he is worried and concerned over the planned relocation of the Brass LNG; “the LNG is a project with FG 40 per cent stake, if it is withdrawn, over 30,000 jobs will be lost.”

“Why would a Federal Government that promised employment and youths’ engagement be thinking of shutting down 30,000 jobs?

“I will pass your message to the Governor and will call on the FG to allow the Brass LNG to stay because if the Brass LNG pull out, the Niger Delta will boil again.”