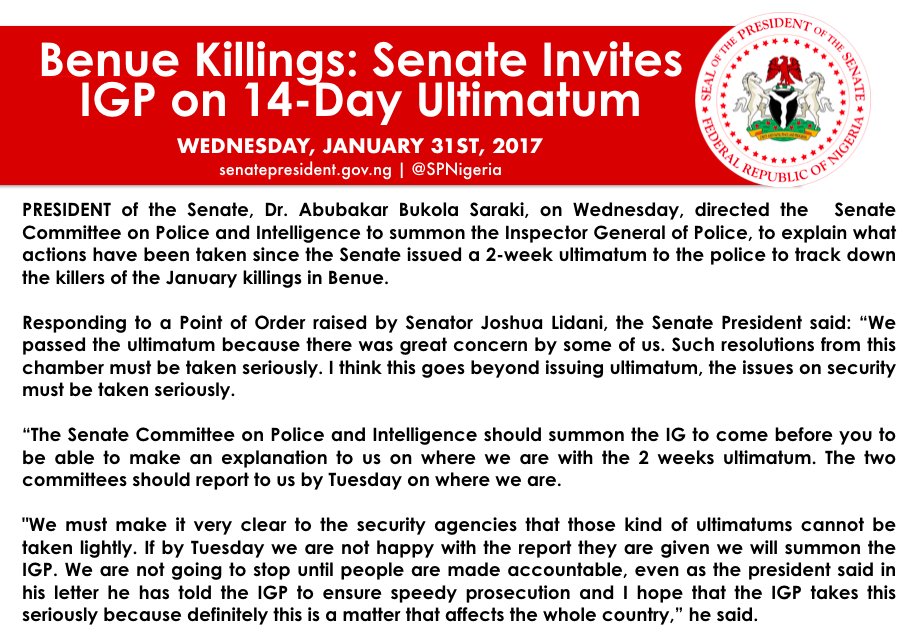 Senate on Wednesday summoned  Inspector General of Police,  Ibrahim Idris over his failure to arrest and arraign those involved in the new year’s killings in Benue state.

Senate had two weeks ago gave two weeks ultimatum to Inspector General of Police to arrest and arraign those involved in new year killings in Benue state.

Coming through point of order,  Senator Joshua Lidani demanded for the appearance of the Inspector General of Police to give update on the issue.

He said since IGP has failed to meet up with two weeks ultimatum,  it is necessary for him to appear and brief us on what has been done so far by the Police.

After the presentation by Senator lidani,  the Upper chamber agreed that the Inspector General of Police to appear before the Joint Committees on Police and National Security on this week Thursday and report back to the plenary session of the Senate.

Meanwhile,  Senate has directed Inspector General of Police,  Ibrahim Idris to provide security for Senator Rabiu Kwankwaso any time he decided to visit his Senatorial district in Kano state.

The  Former Kano Governor had last week put off his controversial plan to visit the state for a series of political rallies due to Police advice.

However,  in a point of order raised on the floor of the Senate by Senator Isa Misau who expressed dissatisfaction with the position of the police.

The issue nearly created rancour in the floor of Senate between Senator Misau and Jubril Barau who is a senator from Kano state.

Barau said it is very wrong for Senator Misau to delve into internal matter in Kano state arguing that Senator Misau is feeding Senate with wrong information on situation in Kano.

Misau had said that people moving around with arms and ammunitions in Kano without caution.

After the exhaustive debate on the matter,  Saraki asked the Senate Committee on Police to mandate IGP to provide security for the former governor of Kano State.

Your allegation over Benue killings is incorrect, Buhari replies Senate