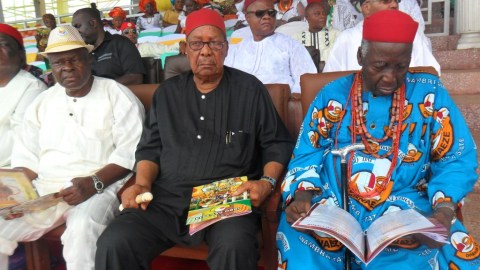 The struggle to actualise the sovereign state for Biafra has taken a new diplomatic turn Elombah.com has learnt.

Media reports say a delegation of some Igbo leaders known as the Alaigbo Development Foundation (ADF), and South East Elders Forum, armed with petitions, visited the United States of America’s House of Representatives in Washington DC and the United Nations, headquarters in New York, to drive home their agitation for self actualisation.

Daily Sun reports being in possession of a petition from one member of the trip on their arrival to Nigeria.

A member of the delegation, Dr. Dozie Ikedife explained that the team spent a couple of weeks in the United States to ensure that the message was properly delivered to the recipients for necessary actions.

Ikedife said the two bodies made up of traditional rulers, religious leaders, academics, technocrats and leaders of thought, in many fields of human endeavour in Igboland, were concerned about the Igbo ethnic group, Nigeria, Africa and the rest of the world.

The petition read in part:

“We have suffered genocidal crimes committed against us by Nigerians, especially those of the Northern Nigeria, dating back to 1945. This climaxed in the pogrom of 1966/67. By the general agreement of the people of Eastern Nigeria, we decided to distance ourselves from the rest of Nigeria, based on many waves of unjustified killings. We therefore, elected to be known as people of independent state of Biafra in 1967. Immediately after this, Nigeria with her allies, declared war on this young state of Biafra. Unprepared, unexpected, we were forced to defend ourselves for 30 months before we were overwhelmed by complete blockade, starvation, heavy indiscriminate bombing of churches, markets and other public places. We were forced to surrender to Nigeria’s allied forces on January 12, 1970, to save the rest of the Igbo population from complete eradication,” the letter read.

The delegation in the petition said despite window-dressing declaration of ‘no victor, no vanquished’ and ostensible policy of rehabilitation, reconstruction and reintegration, economic strangulation and systematic exclusion of the Igbo people of Eastern Nigeria had followed since then.

It articulated what it called unprovoked, unjustifiable sporadic killings of the Igbo that had continued with instances of the Igbo massacre in Jos  and Kano genocide which culminated to 1966 pogrom when, according to the petition, over 66,000 Eastern Nigerian civilians were killed in the North, May 29, 1967 when over 200,000 soldiers and civilians were killed in Western and Northern Nigeria, as well as in 1967 to 1970 civil war when 3,000,000 were said to be killed, among other killings.

It noted that the Igbo, on May 30, 2017, decided to observe a ” sit-at-home”  to ruminate on their fate in Nigeria, as well as remember their people who have been unjustifiably killed before, during and after the Biafra war. It said that the innocuous sit-at-home order was widely obeyed by Igbo people all over Nigeria, to the surprise of the rest of Nigerians.

“Following this, various Arewa (Northern Nigeria) youth groups unanimously issued a 3-month quit notice to all Igbo people residing or doing business in the Northern Nigeria to leave all parts of Northern Nigeria before October 1, 2017. Failure to do so will attract dire consequences including deaths and confiscation of their properties and businesses. The elders of Northern Nigeria instead of condemning this threat, the letter said, confirmed it.

“It described this as a very significant and ugly development that demonstrated deep seated wide spread disbelieve in one Nigeria of equal citizenship for all by people of Northern Nigeria both young and old . The letter noted that arrival at this point indicated that parting of ways, peaceful separation of Biafra from Nigeria is here now.”

The petition also noted that it was the Igbo people who, in practical terms, had demonstrated their belief in one Nigeria, saying that they lived and invested heavily in every part of the country. Whereas, according to the petition, “there is little or no worthwhile investments in Igbo land by Hausa/Fulani of Northern Nigeria or Yorubas of the Western Nigeria.

“The existence of both peaceful and violent agitations in various parts of the country is a clear indication of generalized discontent. The amalgamation of the country in 1914 has become a marriage in which the partners are not happy and appear irreconcilable. The peaceful dissolution of the marriage (amalgamation) is the most prudent thing to do, rather than persist till these agitations spin out of control with destruction of lives of properties and loss of life in thousands or millions again. Since the Igbo people are so hated and badly treated by some other Nigerians, the only fair thing to do is to let them be separated from the rest of Nigeria before it is too late.

“We agree that living in a big country like Nigeria has some advantages. But if security of life and property is not assured in a big country, then it is far better to live in a smaller country and be alive,” the petition further read.

The elders told the international community that they had noted the recent attempts by Scotland to pull out of the United Kingdom after centuries of the union. That the Great Britain voted to pull out of the European Union after several years of membership. They said they also recalled the the break-up of Czechoslovakia and Yugoslavia, the carving out of independent countries out of Union of Socialist Soviet Russia (U.S.S.R) and the recent creation of East Timor, and so on.

They said in the petition that it was because of the Igbo wish to have peaceful carving out of Biafra from Nigeria that the Elders of Indigenous People of Biafra, took the Federal Government of Nigeria to Nigeria’s Federal High Court sitting in Owerri, Imo State, for declaration on the rights of indigenous people to self determination. They said the case was still ongoing.

“We are happy that the United States of America is a champion of democracy and democratic principles hence this appeal to you to help us before it is too late. We hereby appeal to you and through you to the American Congress (Senate and House of Representatives), American Government and American people to save us, the Igbo people of South Eastern Nigeria numbering over 40 million people both at home and outside Igbo land from these series of senseless killings and threats to extermination, before it is too late.

The delegation was also said to have visited Martin Luther King’s Centre for discussion with the management of the Centre on peaceful and lawful process for self determination for people who strongly felt shortchanged.