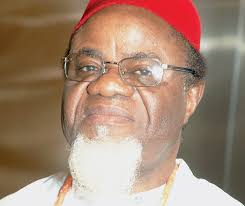 Former Anambra State governor, Chukwuemeka Ezeife, has laid the blame for the current unrest ravaging the South East and South at the feet of Nigeria’s president Muhammadu Buhari.

Ezeife said that President Buhari’s actions are forcing the south East to contemplate seceding from Nigeria.

The former governor said that the current uprising in the South-East and South South championed by the Indigenous Peoples of Biafra (IPOB) and the Movement for the Actualization of the Sovereign State of Biafra (MASSOB) was largely caused by President Buhari’s body language. Chief Ezeife made his remarks yesterday during his telephone conversation with the Daily Sun.

He said Buhari’s body language smacks of so much hatred for people of the South East, insisting that current activities by youths in the region is simply a reaction to the president’s indifference to the plight of people of the zone.

The protesting youths were calling not only for freedom for Nnamdi Kanu but also for Biafra Independence.

He said, “Any time you beat somebody, the person is likely to cry. The South-East feels neglected and ignored. There are six principal political offices in the country as there are six geo-political zones. Each political zone should get one of those offices. They include the president, vice president, Senate president, chief justice, speaker and Secretary to the Gov- ernment of the Federation (SGF) and the least of them is the SGF”.

Chief Ezeife also noted that “Among the zones in Nigeria, the South-East has been denied even the least of the offices. In addition, out of about 39 other appointments earlier made by Buhari, not even one came from the South-East”.

“Again, Boko Haram criminals were packed to Anambra State until recently when I heard that they have been taken away. The body language of the president has confirmed so much hatred for the South-East and what you are seeing is a reaction to President Buhari and his governance,” Governor Ezeife said

“He is pushing the Igbo out of Nigeria by his actions. But I must say that every Igbo wants to be part of Nigeria. There are people like me who do not think only about Nigeria but the black man and God’s assignment for Nigeria.”

Nigeria- Time To Renew These Vows