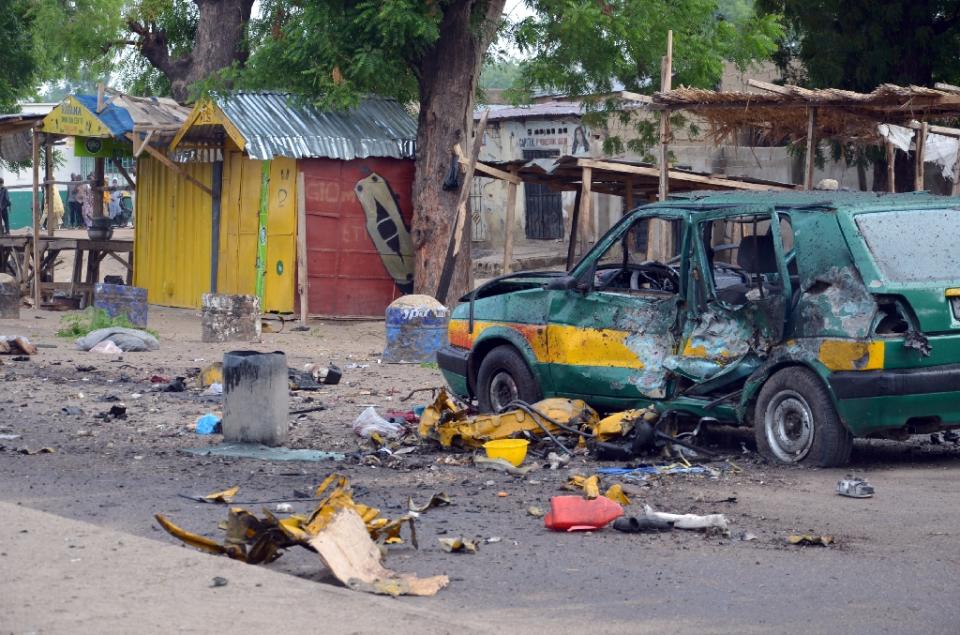 But the 7 Division of the Nigerian Army in Maiduguri on Sunday said the early morning explosion in the out-skirt of Maiduguri emanated from routine testing of military equipment.Speaking to newsmen on Sunday, spokesman of the Division, Col Tukur Gusau, urged residents not to panic.

“It is a routine test firing of our weapons to ensure that they are in a state of readiness,” he told News Agency of Nigeria, NAN.

ABOVE PHOTO: This picture shows a general view of the scene of an Improvised Explosive Device (IED) blast at Gomboru market in Maiduguri, Borno State in northeastern Nigeria on July 31, 2015 (AFP Photo/Str)

Residents said the explosions were heard from from the areas of Kayamla and Dalori, three days after the insurgents attacked Maiduguri, leaving 10 people dead and many more injured. “We are not sure whether the terrorists are planning to invade the town but the sound vibrating is devastating,” said Kursi Yusuf, an employee at the University of Maiduguri.

Khadija Mustapha, a resident of Dalori Quarters, 11 kilometres from Maiduguri, said she had fled her home with her three daughters for fear of being caught in the explosions.

“I don’t know what will happen. The sound of the explosives is really disturbing,” she said. “Many of us… have vacated our homes.” But the army said it was conducting military exercises in the volatile city and urged residents not to panic.

“It is a routine test-firing of our weapons to ensure they are in a state of readiness,” Colonel Tukur Gusau, spokesman for the Nigerian 7 Division in Maiduguri, told AFP.

Earlier a military officer who did not want to be named had confirmed the series of blasts but said troops were on top of the situation. “The terrorists will not have their way,” he told AFP.

Residents were on edge after at least 10 people were killed and 39 others injured on Thursday night when four suicide bombers blew themselves up in the Maiduguri.

On September 20, 117 people were killed in a wave of attacks blamed on the Islamists. Boko Haram has also extended its campaigns of terror beyond its stronghold in northeastern Nigeria.

In the capital Abuja, at least 18 people were killed and 41 wounded when multiple blasts rocked crowded districts of the city on Friday night.

The dead included three civilians and a soldier and four attackers also died during the attacks in Niger’s southeastern region of Diffa, the sources said.

Niger, Cameroon and Chad have all suffered a spillover of violence from Boko Haram’s northern Nigerian strongholds. Niger has arrested at least 1,100 suspected Boko Haram militants this year and has placed its Diffa region under a state of emergency. Diffa, which borders Nigeria, has suffered at least 57 attacks since February, statistics published by the United Nations on Friday showed.

An 8,700-strong multinational force comprising troops from Niger, Nigeria, Benin, Cameroon and Chad will begin operations against the militants at the end of this month when the rainy season is expected to stop, Chad’s President Idriss Deby said recently. The force is due to receive U.S. support, including training, worth $45 million.

Nigeria’s military has also claimed a series of successes against Boko Haram in recent weeks, which has led many to fear an increase in attacks against civilians in the northeast.

The conflict has claimed more than 1,260 lives in Nigeria alone since President Muhammadu Buhari took office on May 29, according to an AFP tally.

At least 17,000 people have been killed and more than 2.5 million made homeless since the Boko Haram insurgency began in 2009.

Emir Sanusi: Nigeria may not take part in stoning of devil again

Hajj Stampede: No Loss of Lives From C’River Pilgrims – Official