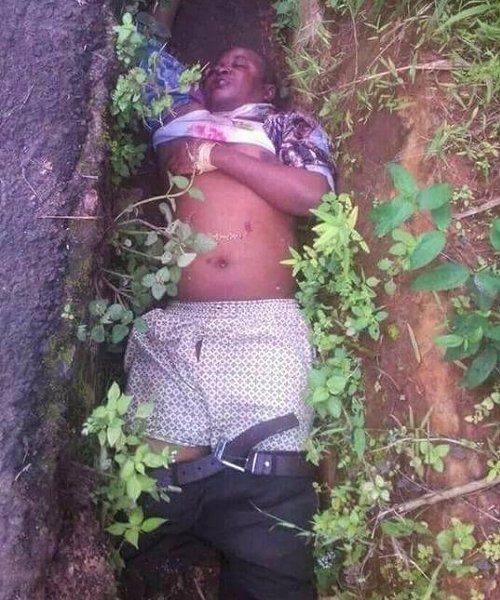 The dead body of the Catholic priest that was kidnapped, Fr. Cyriacus Onunkwo has been found at Omuma in Oru East in Imo State

Elombah.com had reported about the priest who came back for the preparation of his father’s burial and was kidnapped at Banana junction Amaifeke, Orlu.

The clergy hailed from Osina in Ideato Local Government Area of Imo state.

The corpse of both father and son are now lying lifeless at the morgue.

Fr. Cyriacus had come home to arrange for the burial of his father, who died last Monday.

Eye witnesses said that the man kidnapped seemed to a priest but didn’t know who.

The police working with Fr. Ihenetu Christopher (Cuba) came to the scene and saw the abandoned car, an ash coloured Corolla.

They searched the car and found an envelope with Fr. Onunkwo’s name on it.

According to reports, Fr. Cuba started making enquiries upon which he discovered through the help of Fr. Udem and Fr. Ukoha that Fr. Cyriacus Onunkwo actually came home for his father’s burial arrangements and was staying at Fr. Udem’s place.

They further confirmed that the Corolla abandoned on the scene actually belonged to him.

They tried his number but it was switched off. Investigations commenced while waiting for the first contact of the kidnappers.

The report continues: “Rather than the expected contact, the police called to inform Fr. Cuba that a corpse was found, gagged and tied hands and legs, with blood oozing from mouth, ears and nostrils.

“Fr. Kenneth Obialisi and Fr. Cuba responded to the police information only to find out that it was Fr. Onunkwo and he was already dead!

“There was no bullet wound on his body or any serious sign of battering but only blood from the mentioned organs.

“It appears he might have suffocated or had heart attacks resulting in brain haemorrhage.

“They must have thrown him out when he died. (These are speculations pending conclusion of police investigations)

“His body was deposited at Nempi, closest mortuary to where they found him. But right now it is being transferred to our hospital, St. Damian’s Okporo,” said the correspondent.