Boko haram: Military Aircraft crashes in northeast Nigeria killing all on board 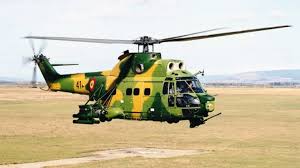 A Nigerian Air Force fighter jet on a bombing mission against Boko Haram crashed in a windstorm in the country’s northeast, killing the pilot, an official statement and a witness said.

The jet “returning to base from an interdicted mission crashed due to bad weather and not under enemy fire,” Air Force spokesman Commodore Dele Alonge said in a statement issued Saturday.

The Chinese-built Chengdu F7 went down in a rural area of Adamawa State, Alonge said. The crash happened in an area where Boko Haram Islamic extremists last year shot down a military jet and beheaded its pilot.

Farmer Moses David said he watched the pilot parachute from the plunging jet, only to ram into a tree, which killed him.

He said there was a violent windstorm when the jet hit the ground with such force that its nose is buried.

The Air Force commander reported ordering new aircraft last year after the U.S. confirmed it had refused to sell Nigeria attack helicopters because of concerns about its ability to use and maintain the aircraft, as well as the military’s failure to protect civilians in the Islamic uprising.

Nigeria’s president of four months, Muhammadu Buhari, has criticized the United States for its decision although President Barack Obama has promised other help to end the uprising that has claimed some 20,000 lives in six years, according to Amnesty International.

Abia State and the Need for Civil Disobedience