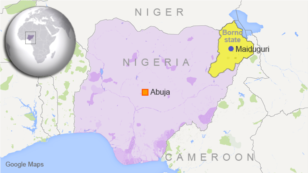 There were no immediate reports of casualties from the blasts.

Witnesses said two of them happened minutes apart at separate mosques in the city as people took part in their final prayers of the day.

Other explosions were reported at markets in Maiduguri.

No group claimed responsibility for the attacks, but Boko Haram has repeatedly used bombings since launching its insurgency in 2009.

Boko Haram, which recently pledged allegiance to the militant group Islamic State, has killed more than 10,000 Nigerians as part of a campaign to impose Islamic rule on northern Nigeria.

Elombah.com recalls that Nigeria’s military on Saturday claimed further gains in its counter-offensive against Boko Haram, but the group’s shadowy leader Abubakar Shekau dismissed the talk of success as “lies”.

Shekau has not been seen on video since February and until an audio message last month had not spoken since March, when he proclaimed Boko Haram’s allegiance to the so-called Islamic State group.

His absence sparked fresh rumours about whether he was still alive or had been deposed as leader, with other videos this year fronted by an unknown rebel under the name Islamic State in West Africa Province (ISWAP).

Shekau said in a 25-minute recording in Hausa and Arabic via social media: “They (the military) lied that they have confiscated our arms, that we have been chased out of our territories, that we are in disarray.

“We are alive, I am alive, this is my voice, more audible than it was before. This is Shekau.”

He added: “Buhari is a liar and has deceived you. The army spokesman is also lying. He and his footsoldiers always run helter-skelter whenever we come face to face with them…

“Buhari, you once claimed that you will crush us in three months. How can you crush us?”

Shekau directly refers to IS group leader Abu Bakr Al-Baghdadi, to whom he says he is “loyal and subservient”.

He also namechecks IS spokesman Abu-Mohammed al-Adnani and sends “greetings to the faithful in Yemen”, where there is also an IS “affiliate”.

There was no indication of where or when the recording was made but it appears to have have been in recent days.

Shekau talks of Buhari’s “deal with Hollande”, referring to the Nigerian president’s three-day visit to Paris earlier this week, which included talks with his French counterpart Francois Hollande.

Police fails to bring Saraki to Code of Conduct Tribunal