Boko Haram not Muslims/Christians but miscreants in the society – Army 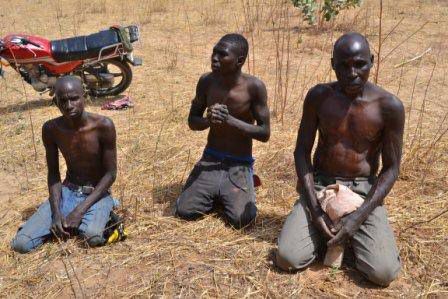 The Nigerian army has affirmed that Boko Haram sect is neither Muslims nor Christians but miscreants in our society who are hiding in the umbrella of a religion.

Brig. Gen. Rodgers Nicholas, who is the chief of civilian and military affairs in Nigeria army, revealed this to Journalist in a press conference held at the headquarters of the 23rd armour brigade, Yola.

According to him the Nigerian Army is also having martial plans to hold a deradicalization programme for the North East region, just as it said it would continue to be in the region until the return of normalcy.

He said the deradicationalization programme which is aimed at restoring peace to the North East, will equally help to give the populace a sense of safety.

Nicholas, who urged the support of stakeholders towards the initiative, said it was the responsibility of all to see that these things (insurgency) are put behind us.

Brig. Gen. Nicholas again reiterated the perception of military, of the Boko Haram sect whom he described as a “purely criminal group”, this he noted was against the backdrop of disillusionment with that, the group was sympathetic to a particular religion.

He urged the public not to be misled into thinking in that manner but instead to see the sect as criminal element, who have been responsible for maiming the lives of both adherents of the two religions, including the destruction of their places of worship.

“This people are basically criminals and that is how we see them in the military,” he said.

The head of Civil military relations who said he was in Adamawa, as part of the process of drawing awareness on the take off the deradicalization programme, added that the sensitization of civil societies group will also enable the programme to reach every nook and cranny of the state.

While interacting with the civil society groups, International Non-governmental Organization and representative of religious bodies on its plans to achieve peace and restoration of normalcy, to the embattled region, Nicholas disclosed, that the military “will continue to be in the region until we are sure life has returned to normalcy.

Re: Buhari’s appointments: ethnicity or comfortability