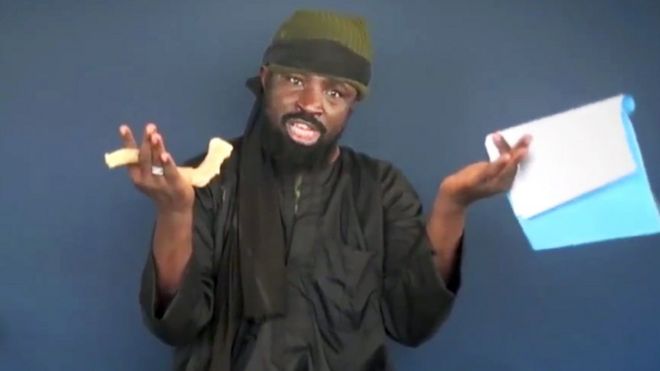 The disputed leader of Nigerian Islamist group Boko Haram has released a video message denying a claim by the military that he was killed or badly wounded in air strike last month.

Abubakar Shekau appeared healthy in the video in which he spoke in Arabic, Hausa and the Kanuri language.

It is not clear when it was recorded.

Earlier this month, the Islamic State (IS) group – to which Boko Haram has pledged allegiance – announced that Shekau was being replaced as leader.

IS said he had been replaced by the lesser-known Abu Musab Albarnawi, but Shekau said he was still in charge.

“Oh tyrants, I’m in a happy state, in good health and in safety,” Shekau said in the 40-minute video posted to YouTube.

In August the Nigerian army said that Shekau had been seriously wounded in the shoulder in an air raid in which several commanders were killed.

The military has yet to comment on the latest video.

A military campaign launched in 2014 has seen Nigerian troops reclaim large tracts of territory in the northeast of the country from the Islamist group.

ABOVE PHOTO: Shekau, seen here in a video last year, said he was in a “happy state” – AFP/GETTY

Pastor transfixed while trying to destroy a shrine in Ogun State