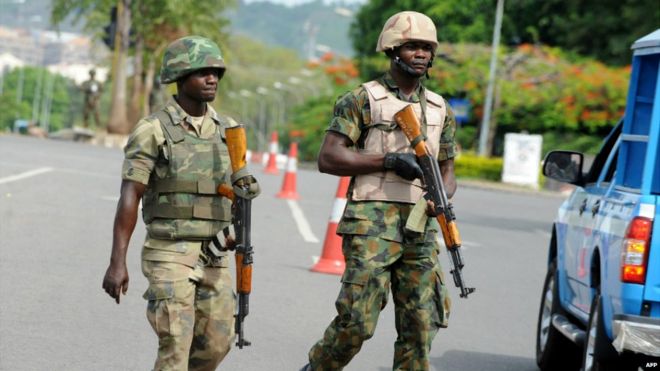 Nigeria’s State Security Service has warned of a possible attack on the airport in its capital after disrupting what it said was a Boko Haram cell.

ABOVE: Nigeria military on alert

Authorities said on Friday that a boy, 14, had been arrested for spying on security procedures at Abuja’s airport. Sulaiymon Abdulraman was apprehended with the help of the aviation security officials at the airport.

On interrogation , Abdulraman said  he and others, recruited by the terrorist group infiltrated the airport with the assistance of Dauda Sadiq who is at large.

The suspect further revealed that Sadiq directed him to spy on the installation and pass to him information in respect of travelers’ movement including passenger screening, boarding procedures and other processes in the departure and arrival halls.

The DSS said its officers are working closely with major aviation stakeholders especially the aviation security department to forestall any possible attack and to ensure adequate security at the airports. It said agents are still searching for militants who were directing the boy.

He was instructed to pass on details about “passenger screening, boarding procedures and other processes in the departure and arrival halls,” according to a statement from the Department of State Services (DSS).

The DSS said the arrest of the 14-year-old had “disrupted a spying network mounted by the Boko Haram terrorists”. It said the network was discovered on Monday and it was working with aviation authorities to pre-empt any attack at the Nnamdi Azikiwe International Airport.

Boko Haram has waged a six-year violent campaign in Nigeria, killing thousands and forcing millions to flee their homes.

The bloodshed has been largely confined to the northeast of the country where the group has declared an Islamic state. Members of the public have been asked to remain vigilant and report all issues and persons of suspicion to the nearest security agency.